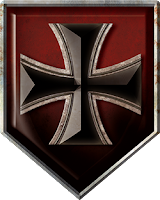 I've finally finished up most of my Dust Tactics infantry figures a few weeks ago and finally got to post them up this weekend.  First of all these are not the typical pewter figures that I'm normally used to painting.  Futhermore, they're not the typical vinyl figures you see from Wizkids Heroclix.  They are made of a soft plastic much like the Heroclix figures, but overall the sculpts are better than 90% of the stuff you get from Wizkids and the detail is shaprer and better defined.  Unfortunately the soft plastic lends to bendy gun barrels.  Which is why I'd rather pay more for metal figures.  Unlike the Heroclix figures, these come unpainted, or more specifically 'Pre-Primed'.  These are simply painted one color for each faction, German Grey for the Reich and Olive Green for The Allies (just like the old sandbox armymen).  The paint is flat and accepts paint well, should you choose to paint your minis.  I thought this was a good alternative to pre-paints as many gamer who enjoy quality sculpts and like to paint their minis do not appreciate the added cost of prepainting and most of the prepaints tend to be of poor quality.  As the Dust Tactics game is pretty much a boardgame, the simple monochrome look of the playing pieces works well.  Saving money by eliminating the prepaints allows the price point to be much more attractive.  Overall, you get a lot of minis for the price of a starter set compared to the out of production AT-43.  Dust Models does offer a premium line of prepainted miniatures, that are up to AT-43 levels but at a significantly higher price.

The figures displayed here include all the Axis infantry figures from the original $100 starter set plus 1 addtional box of Battle Grenadiers and LASER Grenadiers.  I haven't started the mecha yet.  As the figures were dressed in winter gear and the setting of the starter set involves an Allied invasion of a secret German base in Antarctica in the alternate timeline of 1947, I figured I'd go with looking up some actual WWII German winter gear.  Despite it being Antarctica, I decided I didn't want to go pure white as it wouldn't look as exciting, and then they'd be the same colors as the Allies models and then that would defeat the purpose of telling which model belongs to which faction.  Besides not all battles in the Dust universe are set in Antarctica and I sort of reasoned it that the soldiers stationed at this secret base in Antarctica weren't issued any specialized gear, just what was on the shelf at the time when they were shipped out. 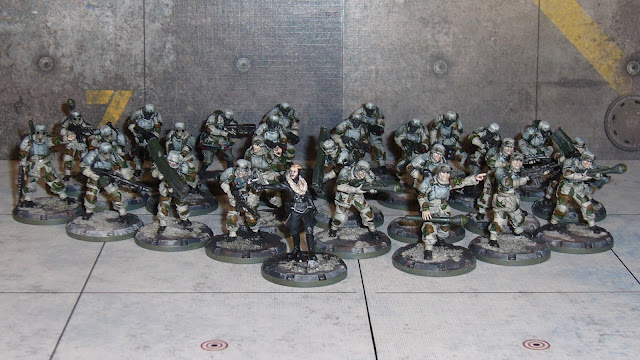 I started with painting all the cloth parts of the figure a base of Vallejo Panzer Aces White, blending in some Reaper Pure White for highlights.  For the camo pattern I used Vallejo German Camo Brown and Luftwaffe Camo Green.  I had to be careful to make sure where the splotches stopped at, around pockets and seams.  Then I went back with a Micron 0.05 Black pen and drew in the black border around all these splotches.  Boots were done with Vallejo Red Leather with several coats of Citadel Delvan Mud and Badaab Black glazes to darken them to almost black.

Helmets and body armor was painted Vallejo German Camo Dark Green and combat webbing with Vallejo Green Grey.  Faces painted with Reaper Pale Flesh colors with P3 Flesh Wash and the weapons were painted with Reaper Blackened Steel with P3 Armor Wash.  Weapons like Panzerfausts, Panzershrecks and ammo boxes for machine guns were done with German Camo Dark Green.  Using a stipple brush I splotched on a mix of Panzer Aces White and Reaper Pure White, thinned down with acrylic floor wax, over the helmets and body armor to further give the troops the look like they made some field modifications for a more 'whiter' camoflauge. 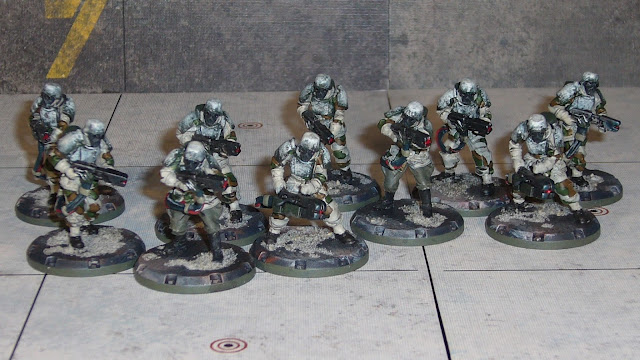 For the LASER Grenadiers I painted their LASER weapons using Blackened Steel with some True Silver highlights followed by an inkwash of P3 Armor Wash.  The power cables were done in Vallejo Grey Black with one cable having a white stripe and the smaller cable in Reaper Bright Red.  The powerpack was German Camo Dark Green and the cable wrappings in Green Grey.  The lense of the LASER weapons were done by painting them in black, adding a dab of Reaper Polished Silver and then covering the lense in Tamiya Clear Red.  This gives a nice red  glow when photographed with a flash.  The squad leaders did not have the baggy Fallshirmjager style pants and boots that the rest of the troops had.  I painted them in Vallejo Fieldgrau with black boots.

The hero figure that comes in the original starter set is Sigrid von Thaler, head of the Reich's Blutkruez Korps.  I painted her pretty much as most of the concept art went with the usual Nazi Villianess black leather look, rather than her purple outfit. However I went with a white fur lining around her coat rather than the black as accented the figure better and tied it in with the color of her troops.  I also added some piping to the uniform using Reaper Misty Grey.  Her LASER pistol was done the same way as the LASER Grenadier's weapons.

To finish off the figures, I painted the bases which come with a special 30mm stylized base with a steel plate diamond pattern and bolts along the side.  I painted the based Vallejo German Grey with a drybrush of Blackened Steel and some Reaper Rust Red.  As I usually paint the lips of the bases a faction color, I stuck with the colors I established with my AE-WWII miniatures which was Germans have Fieldgrau.  Then I topped off the base with some Woodland Scenics Snow and White Ballast Rocks.

Posted by CmdrKiley at 8:22 PM