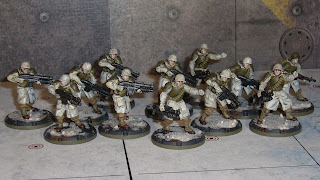 Right after completing my Axis models I started working on my Allies models for Dust Tactics.  In the Dust universe the Allies are pretty much a combined army made up of mostly American and British Commonwealth troops.  Most of the gear appears to be American with some British weapons mixed in.  I kept with the American Army colors just to stay consistent with the rest of my Weird War II American Army figures.  Like my Axis troops, I didn't want to go pure white and figured that these troops were sent to Antarctica on a rushed mission and were given standard winter clothing for Europe. 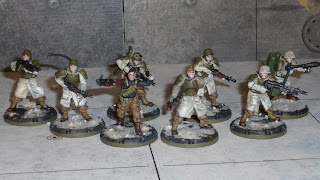 So I started off with painting the pants Vallejo US Field Drab with USA Tan Earth highlights.  Boots were Vallejo Red Leather with Citadel Delvan Mud to darken them up and finish them off with black soles.  The gaiters were done with Vallejo Green Grey with a Citadel Gryphon Sepia glaze.  The overcoats, gloves and helmet coverings were done with Reaper Khaki Highlight, mixing in some Reaper Pure White for highlights.  Helmets and body armor was done with Vallejo Brown Violet.

Flesh was painted using Reaper's Pale Flesh colors and finished with P3 Flesh Wash.  Combat webbing was Green Grey with Gryphon Sepia glaze.  The M1 Assault Rifles, sort of an advanced version of the M1 Garand, was done with Vallejo Mahogany Brown, with a Delvan Mud glaze.  Metal parts were Reaper Blackend Steel with P3 Armor Wash.  The grenades fitted under barrel were done with Reaper Muddy Olive as was the Bazooka and radio pack.  The goggles were painted Green Grey frames and Violet Brown (when mounted on the helmet) with a coating of Tamiya Clear Smoke.

The hero that comes in the original starter set is Captain Joseph Brown (aka Bazooka Joe) who is part of ASOCOM, a special forces division within the Allied Army.  Joe comes armed with a .45 Pistol and what looks like an oversized M79 grenade launcher.  I painted Joe's pants the same as the rest of the troops but gave him a black turtleneck sweater with Field Drab patches on the elbows and piping.  The .45 got some extra highlights with Reaper True Silver.

Like the Axis figures (I assumed they're all fighting on the same terrain), I finished off the bases with the same colors except paiting the edge my standard color for my AE-WWII US Army figures which was Brown Violet.  Then finished them off with some Woodland Scenics Snow and White Ballast rocks. 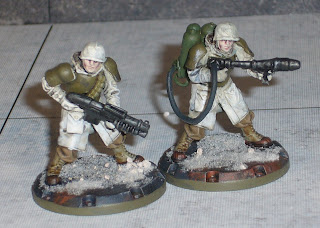 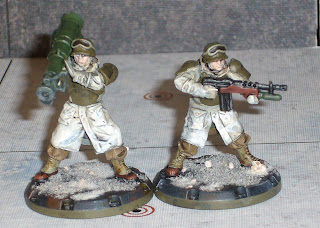 Posted by CmdrKiley at 9:00 PM