Well this year my daughter had to pick from a list of books were written before 1940 for her book report.  She chose The Hobbit by J.R.R. Tolkien, and I was proud.   Not only is it a great fantasy story that (as well as The Lord of the Rings trilogy) became the inspiration for Dungeons & Dragons and most fantasy settings since then, but it was a pretty big and challenging book on its own.  She's an avid reader so she was up for the challenge.  Upon nearing completion of the book, she informed me that she had to complete a project based on the story as part of her book report.  The choices included a puppet show, dressing as a character from the book, or building a diorama.  Naturally she chose the diorama (although I had to tease her about presenting her report in bare feet with fake fur attached to them) and requested assistance from her dad.  This was certainly going to be a fun father daughter project with lots of potential to teach her some wargaming craft skills.

So I asked her to pick a scene from the story and give me a list of what elements were in it.  I would get the materials and we'd start building it.  She picked the scene where the Gandalf and the twelve dwarves arrive at the residence of Bilbo Baggins, known as Baggs End.  So we needed about a dozen male dwarven adventurers, a male hobbit (aka halfling) civilian, and a male human wizard.  I ended up going to Mega Minis to get all the stuff we needed in one place.   I chose the 24 pack of dwarves, figuring that Sydney could pick the ones she wanted from that, and the Halfling Villager set, just in case we decided to expand our diorama to include parts of Hobbitown.  They also had a perfect Gandalf looking figure and even some medieval dinner tables and benches, in case we decided to do the scene where they're having dinner.  It was expensive, but I figured this was a good investment in Sydney's already growing collection of D&D minis and all the excess minis were certainly going to be put to use elsewhere.

The miniatures arrived within a week of placing my order and Sydney immediately went about picking the dozen dwarves out and assigning them the names from the book.  Next step was cleaning miniatures, where I got to teach Sydney how to clean flash with an X-Acto Knife.  Fortunately the castings were very clean and didn't require much work other than cutting a thick chunk off the bottom of each base.  The next step was to prime them.  So I now let Sydeny use the spray paint to give them a good coating of flat white primer.

To build Bagg's End, we needed to make a hill with a circular door in the front as hobbits live underground.  I pulled out my Hotwire Foam Factory tools which I've used to make some other battlefield terrain in the past, including my modular trench battlefield and my fortress.  Basically it's an electrically heated wire that melts the styrofoam and allows you to carve it and make some very lightweight irregular shapes.  I also have a table saw version that allows you to cut straight uniform edges.  Working out in the garage because, like the spray painting you need to work with very open ventilation I started to show Sydney how to cut and shape with the free hand tool and some scrap styrofoam.  Using a 16" x 16" square MDF board we sized up some sheets by scoring it with a pen and then I got to show Sydney how to use the table cutter.  We cut 2 sheets with the intention of stacking them and carving them down to make a hill.  Using a Sharpee pen we sketched out the topography of the hill and with the freehand tool carved out a natural shape for the hill.  We then glued these sheets to the MDF board and each other using Uhu brand glue and stacking some heavy books on top of it while the glue cured. 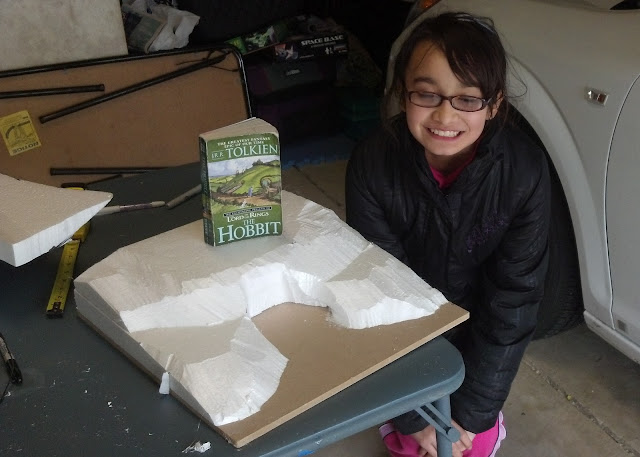 So now we were back to painting the dwarves, and it was going to be a daunting task as I was informed that the due date was 2 weeks sooner than I thought.  Fortunately that weekend her friends Hollee and Macee were over, both of whom we've help with their school projects in the past.  So we enlisted them in getting these figures painted and it turned into a nice weekend activity where I got to teach them all on how to paint Dungeons & Dragons minis, eat some home made chili the wife made, and watch the rest of The Two Towers. 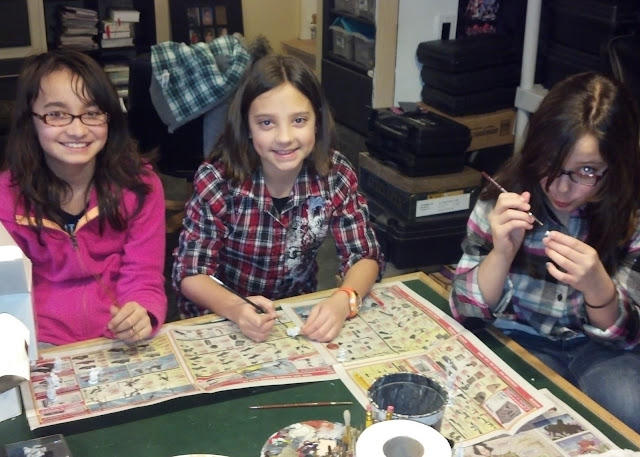 So we started off with the first step and that is painting flesh.  We used Reaper Pale Flesh skin tones for all the figures.  Starting off with Pale Shadow all the fleshy parts were painted in assembly line fashion.  The next step was to highlight the upper features like cheeks, noses, brows and fingers with Pale Flesh and finally top it off with Pale Highlight on the nosetips, chins and knuckles. Then a wash of P3 Flesh Wash thinned with acryllic floor wax. 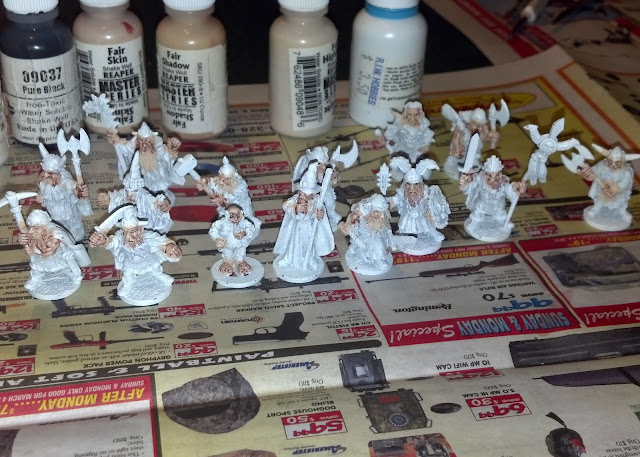 So while the girls were taking a break reviewing my D&D rulebooks for ideas on adventurer fashion trends, I was painting in the eyes.  First using a some flat black to fill in the eye area.  Then a sliver of Pure White in the center of the black, so you end up with a fine black outline of the eye.  Then using a Micron 0.05 felt pen, I'd dot the eyes.

So with the girls back with some ideas of the colors that dungeon adventurers would wear, we were back to painting.  Now since these were not a uniformed army, we couldn't just do them in assembly line fashion.  Rather painting one part of a figure one color, then paint the same part of another figure another color and so on.  So generally you start with the pants, boots, shirt, overcoat, capes, helmets and beards.  Then go back in and paint details like weapons, belt pouches, jewelry, and such.  Pretty much using a different color each time.  I'd help advise the girls with some of the colors and then show them a few tricks like using glazes over some of the leather brown colors to give a natural worn leather look on items like the boots. 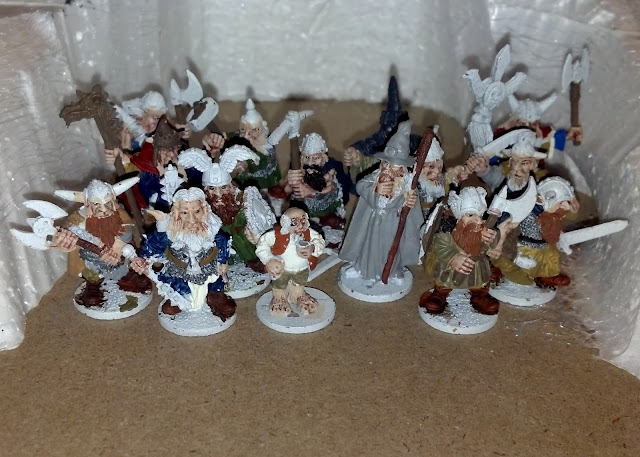 So with the help from Hollee and Macee, we were back on schedule with our new due date.  Sydney and I spent the next several days finishing up these figures.  I spent a few nights, after bedtime for Sydney touching up a few things like painted beards with unpainted mustaches, but still Sydeny did most of the work.

We had to get back to working on the hill.  The first step is to seal the styrofoam with latex paint.  This serves several functions.  The first is to seal and protect the styrofoam from the solvents in the spray paint, which will melt it.  In fact you need to make sure that the entire surface is sealed because any little pinhole that allows spray paint solvent to leak through will cause a crater.  A thick coating of latex also hides the styrofoam texture and strengthens it up.  We gave it two generous coats of some leftover white primer I had in the garage and let it sit out in the sun to cure.

After that had cured, I was teaching Sydney how to spray paint the ground colors.  The intention was to cover the surface with sand and static grass, but you really need to color the underside otherwise the white will show through.  So we sprayed brown along the roadside and path to Bilbo's doorfront and shades of green around the other areas we wanted grass.  No craters formed, so the latex successfully sealed the foam and the seams were filled in with the pooled up latex paint.

With that done, I thinned out some tacky white glue and Sydney dabbed it on the road and pathway to Bilbo's door.  We then used some GF9 ground turf and sprinkled that on glued areas.  Let it sit for about 10 minutes and then shake off the excess.  We'd collect the excess and use them later.  Then we did the same with the areas that the grass was going to be applied to.  Sydney then took clumps of green GF9 Static Grass and sprinkled it all over the glued areas.  Wait again another 10 minutes for the glue to set and shake off the excess and collect it up for later use.  Static Grass is simply colored felt fibers that tend to stand up on end.  This gives the surface a 'fuzzy' grass-like texture.  With the excess turf, Sydney applied a thin coating of glue along the bases of each figure and dipped them in the turf so they match the road they will soon be glued to.  While Sydney was doing this, I was applying some of the tacky white glue and some Woodland scenics Green Clumps to make bushes around the hill.

Using Crayola Air Dry Clay we rolled up small 'stones' and gently pressed each onto a sheet of aluminum foil.  After we made enough we put them in the oven at 250 degF for about 30 minutes to make sure all the moisture was out, as we couldn't wait 2-3 days for the stuff to cure.  Cutting some wood planks to various lengths, I glued them to the wall and we placed some clay stones around it such that it hid the sqaure shape of the planks and made the door look circular.  Using some Uhu glue we glued the stones all around the door. 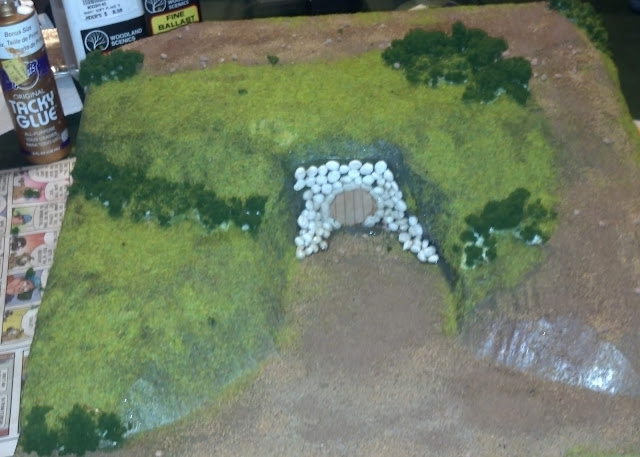 We then added some Woodland Scenics Plastic Trees. These involved some soft plastic tree trunks that could be bent and twisted to shape.  Unfortunately we should have thought about putting them on before gluing the rocks on.  However I was able to secure these using some generous amounts of cyano-acrylate glue (aka superglue) to the bases and pressing them down so the glue soaks through the turn and secures it to the painted latex surface below.  Furthermore using some accelerant to cure the glue around it sped things up so we did have to hold the trunks in place.  Topping the trunks with some thin green mesh that came with the kit by using more tacky white glue.

Sydney said that according to the book, Bilbo's door was green with a gold door knob in the center.  So she picked out Reaper Brilliant Green and painted the door.  The clay stones looked natural enough and a good contrast between the green hill and green door we left them alone.

We then test fitted the dwarves onto the diorama.  According to Sydney, each of the dwarves arrived at Bilbo's house one at a time with Gandalf arriving last.  So we put Gandalf last, up on the road, and Bilbo in front of the door.  Sydney then picked which dwarves arrived in what order.
After Sydney photographed some of the individual figures, we glued them in the same manner using the CA glue and accelerant. 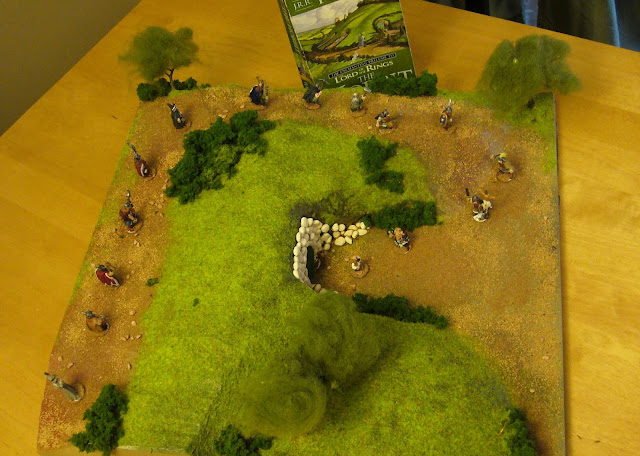 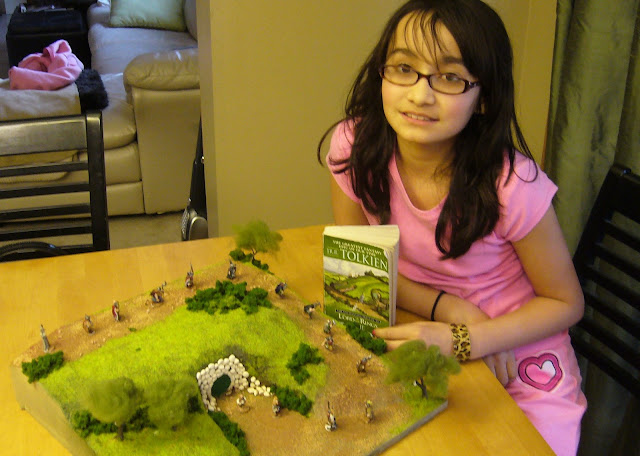 So we finished up a day early and ready to deliver her assignment.

Posted by CmdrKiley at 8:25 PM