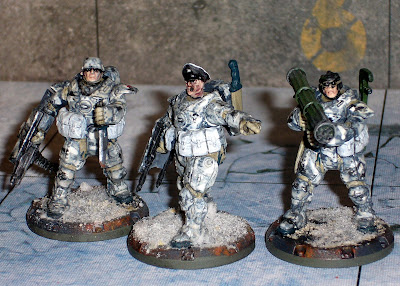 Along with my Allies powered armor, I was working on my Axis powered armor for Dust.  For the Heavy Grenadiers I painted all the armor plates Vallejo German Grey.  The flexible undergarment was painted Vallejo German Camouflage Beige.
Then for the winter camouflage, I thinned out some more Camouflage Beige with acrylic floor wax and dabbed it on the armor plates.  Then I used Vallejo German Splinter Camouflage White and did the same thing, however using varying degrees of paint/floor wax mix to give some spots a heavier white area and other spots a thin 'see-through' white area.  The splotches would go on over the beige and white splotches in overlapping layers. 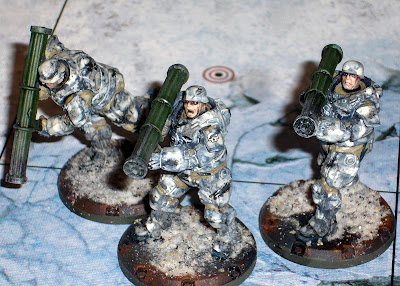 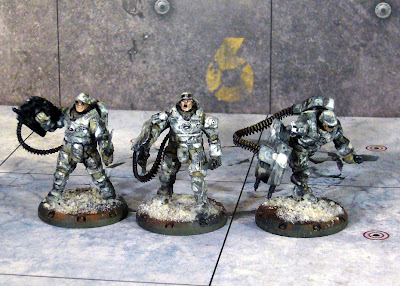 Other details like rubber treads on the boots and pipes routed under the armor plates were done with P3 Coal Black.  Ammo pouches were done with Splinter Camouflage White, with Pure White highlights.  Weapons like the Fliegerfausts were painted Vallejo German Reflective Green.  Ammo belts on the Heavy Recon Grenadiers was done with Reaper Tarnished Brass and Blackened Steel, followed by a coat of P3 Armor Wash. 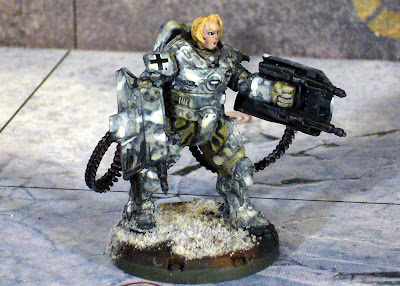 After finishing all details on the models.  I then applied decals from some Flames of War decal sets.  German balkencruze on the right shoulder pad of each of the PA suits and a red cross on the left shoulder pad of the medic in the command squad.  From the decals I got from Dust Models, I applied a small skull decal under the left shoulder pad for each squad leader.  After the decals were applied, also using Microsol to make sure the decals fit the shape of the surface, I sealed them with a coat of Dullcote.  Next I went about weathering the armor with some dabs of black, grey, and Blackened Steel along the edges of the armor on the high wear areas.  Then finished off with a black ink wash and another coat of Dullcote. 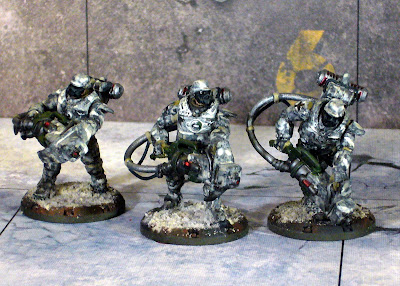 For the schwer lasers with the Laser Grenadiers, I painted the inside of the barrel black.  Then put a small dot of Reaper Polished Silver in the center and then filled the open end of the barrel with Tamiya Clear Red.  Under a flash this appears very well as a red laser dot.

I also picked up some more Grenadiers, including some of the command squads that are necessary to play Dust Warfare.  Also some specialists like the Sniper / Observer Teams and some Heroes.
I painted these in the same manner I painted my other Axis Grenadiers. 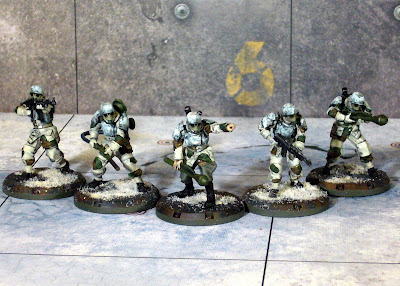 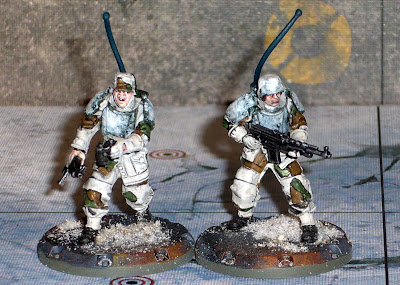 Now the bases that all of these Dust models come on, are hard plastic 30mm stylized bases unique to Dust Models.  They have a neat diamond plate texture on the base and some bolt heads around the periphery.  As a means of unifying my whole collection, I paint them all the same colors (Axis, Allies and SSU).  This way they all look like they're fighting on the same terrain.  These bases can be obtained separately from Dust Models and also come in a variety of textures.

I start with painting the base with Vallejo German Grey.  Then I will dry brush some black and Reaper Blackened Steel over some of the diamond weave surface and along the edges of the base and over the bolt heads.  Then along these blackened areas I will dry brush some rust over these worn areas, to make it look like the paint has scratched off and the metal below has rusted.  For the rust colors, I'm using Life Color Dust & Rust weathering set.  I start with using Rust, Light Shadow over the area, including outside of the darkened area.  Then I use a lighter application of Rust Base Color over the central area, and include some run lines along the vertical surfaces.  Then a very light application of Rust, Dark Shadow over the very tops of the surfaces. 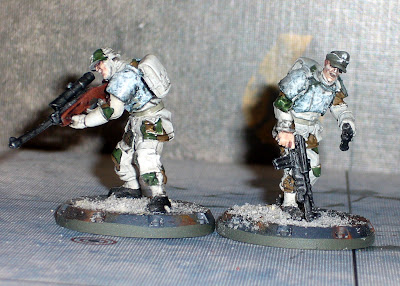 After the black ink wash of the whole model and allowing the ink to dry for about a day.  I'd then mix up some white PVA glue with water and apply dabs of that along the base.  I'd sprinkle on some Woodland Scenics White Stone Ballast and Snow on the base.  After all the figures are done, I'd blow off the loose particles and then seal the rest with the final coat of Dullcote. 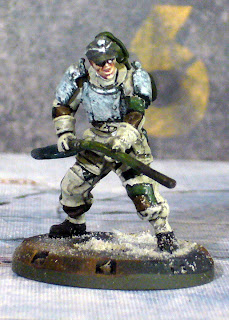 For the heroes, Stephan here was painted much the same way as the other Grenadiers.  He's essentially the flamethrower specialist in the Sturmpioneer Squad body with another head.

For The Totenmeister, I painted her coat Reaper Pure Black with P3 Coal Black highlights followed by several thick black ink washes.  The harness was Vallejo Green Grey.  The Blutzkruz was simply Reaper Blackened Steel over black with some Fluorescent Blue over white for the glowy bitz. 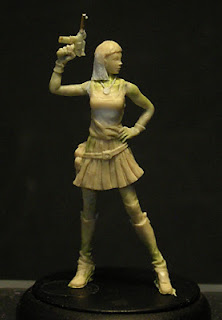 Angela the Axis Assassin posed a bit of a problem.  As skinny as she is, she was a poor choice for this soft plastic material these Dust models are made of.  She was all bent up and contorted.  The whole figure seemed to be a compromise.  The original green and concept art of her simply was armed with an automatic pistol.  However she got upgraded to a 20mm Solothurn Sniper Rifle.  The rifle seems a bit awkwardly posed and the long skinny barrel was all bent to hell like her legs.  Furthermore, she had some sort of material build up on her left shoulder that looked like a flaw in the mold.  Also the features on her face seemed a bit shallow, more so on one side.  Overall, I wasn't too pleased with this model.  I'm glad I didn't spend the full $45 on the Dust Tactics Operation Cerebus.  However the modular building pieces that come in the set are a pretty good deal.
I was able to fix the bendy legs issue by applying a thin coat of cyano acrylate glue along the upper parts of her boots.  While holding the figure in the upright pose that I needed her to I sprayed accelerant on the glue, now freezing her legs straight and stiff.  I did the same with the gun barrel.  The material on the shoulder was removed with an X-acto Knife using a brand new blade.  However I had to be careful enough to carve it in such a way that there was some definition between her T-Shirt and shoulder. 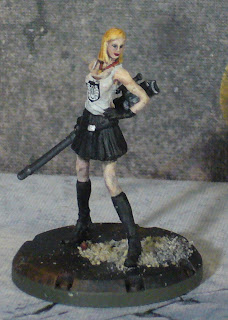 Painting her, I started by painting the whole figure with Reaper Pale Flesh Shadow, followed by Pale Flesh and Pale Flesh Highlight.  Then finishing off with P3 Flesh Wash thinned with Acrylic Floor Wax.  The T-Shirt was Reaper Pure White.  However to give it a shear look, I started by painting the tops of the folds, where the shirt was furthest away from the skin with Pure White right out of the bottle.  Then I'd gradually add floor wax to the mix and work down from the folds until I'm applying a translucent white over most the t-shirt.
I went with white stockings rather than black, I thought the contrast was better than the black stockings in the concept art.  I used Vallejo White Glaze and thinned it with floor wax again.  Next I painted the skirt, boots and gloves Reaper Pure Black.  Dry brushing some German Grey over the highlights and then applying Citadel Baadab Black Glaze.  Belt was done with Testors Gloss Black with Reaper True Silver for the buckle.  The Solothurn was simply Reaper Blackened Steel with P3 Armor Wash.  I finished her off with a decal from one of my Flames of War decal sheets.  I didn't have any iron eagle like on the concept art, instead I used some SS Panzer division insignia.  It looked close enough.  This required lots of Microsol, to get the decal to conform to the shape of her shirt.  Then I sealed it with Dullcote and finished off the rest of the model.
Despite the shallow and uneven features molded into the face, I was able to paint the eyes in and still get a decent look out of her.  The hair was done with Reaper Golden Blond with Citadel Gryphonne Sepia Glaze.  Overall I was much more pleased with the end results of this model then I was when I got her out of the box. 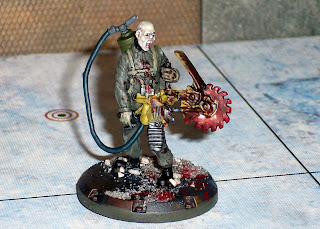 Now Grenadier X is an Ubertotenmensch, or sentient thinking zombie, who can lead squads of Axis Zombies.  Armed with a power saw, he's pretty nasty in close combat.  I painted him using my usual zombie painting techniques, however I cut back on the gore and stuck with more pale flesh colors as he's not really been recently chewed up or anything.  He's painted using Vallejo Fieldgrau for his jumpsuit with a Green Grey harness.  The fuel tank for the saw is German Reflective Green and the hose is P3 Coal Black.  The saw is Citadel Sunlight Yellow with Reaper Honed Steel for the blade.  Now no zombie would be complete without gore, so I added lots of blood to the saw blade and make sure it got splattered all over the shield, jumpsuit and around the base.
So now I'm pretty much caught up with my Dust infantry models.  Next is to start working on the vehicles.

Posted by CmdrKiley at 8:27 PM