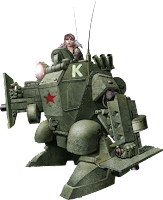 I've been working on my Sino-Soviet Union forces for Dust lately.  The SSU are the latest faction for Dust Tactics and Dust Warfare.  In the Dust history, Stalin, angered by the Allies attempt to negotiate peace with the Axis, forms an alliance with the communists in China and declares war on the Allies as well the Axis.  The SSU makes great strides in fomenting revolution throughout Asia, South America, and Africa.  By 1947, they even launch invasions into Alaska and Florida. 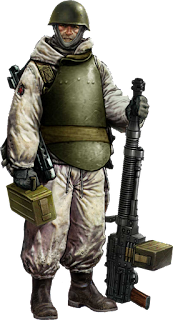 The uniforms of the troops are extrapolated from actual WWII era Soviet uniforms, including some body armor.  Weapons are extrapolations from existing WWII weapons.  The big thing is that the SSU introduce helicopters, adding a whole new dimension to the game.  The SSU is behind the Axis and Allies in mecha designs, relying on captured German mecha and refitting them with Soviet weapons.  Furthermore, they lack powered armor troops, like the Allies Heavy Rangers, but they make up for it with mecha sized KV47  Walker heavy powered armor suits.
My collection of SSU so far has been all the releases from Operation Zverograd up to the SSU Heroes, except for the KV47 Walker.  Like the Axis and Allies, I've focused on the infantry first before starting on the vehicles and mecha.  Overall, I really like the sculpts of the SSU over that of the original Axis and Allies figures.  They seemed more realistically proportioned and dynamic.  Also the figures were not made with the socketed waist, so there was no gap filling required there.
I found the glue that held the heads in place seemed to be holding only at the very least.  Whatever glue they used, reminds me of rubber cement, is clearly the Post-It Note adhesive of glue.  This is both a blessing and a curse.  Curse as in the heads were falling off as soon as I started handing them outside of the box (a warning to those of you who plan to play with these right out of the box) and a blessing as it allowed me to reposition the heads (and even do some head swaps if I wanted to).
I found these figures had a higher amount of flash on them compared to the original Axis and Allies figures.  With this soft plastic these figures are made of, cleaning up flash is actually more difficult than doing it with hard plastic or pewter.  You need a very sharp razor to trim the flash and even then there are little straggly bits that just won't come loose.  Another common problem with this soft plastic is bent weapons.  The SSU's weapons are a bit more realistically sized than the original releases, which pretty much means longer and skinnier barrels.  The Widowmaker Sniper Rifles and the DP-28 Machine Guns were pretty bad.  I had to fix them by applying a thin amount of cyano acrylate glue (super glue) along the barrel and hold the barrel straight.  Then spray some accelerant on the glue to freeze it instantly in place.  I recommend using the thinnest CA glue you can find, the stuff you would normally use for wood and not plastic.  The thicker CA glue can fill in all the ribs on the DP-28 and simply leave you with a gun that looks like the barrel was dragged through the mud.  Unfortunately some of the weapons, particularly the PPSh-48s were bent in such a way I could not correct them. 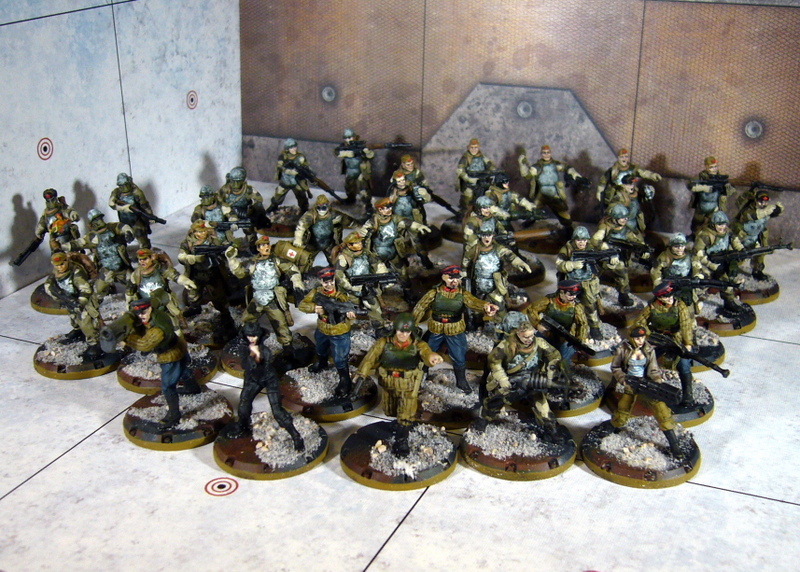 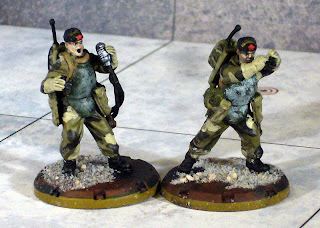 For the paint scheme, I painted the basic troops jumpsuit using a WWII era Soviet camouflage scheme called Amoeba Pattern.  The base color was Reaper Khaki Shadow and the amoeba blotches were Reaper Olive Shadow.  However, since the rest of my Dust figures have been painted in a winter scheme and these figures appear to be sculpted in a cold weather kit I added some amoeba shaped blotches of Reaper Khaki Highlight to lighten them up.  The helmets and body armor were painted using Vallejo Russian Army Green, but I added a white wash of Vallejo Panzer Aces White.  Just like my Axis armor, I'd thin some of the White with acrylic floor wax and with a messed up brush (bristles bent in all directions) and just dabbed it around on the armor in layers.  This simulated a white wash field applied camouflage and again lightening up the colors of the troops. 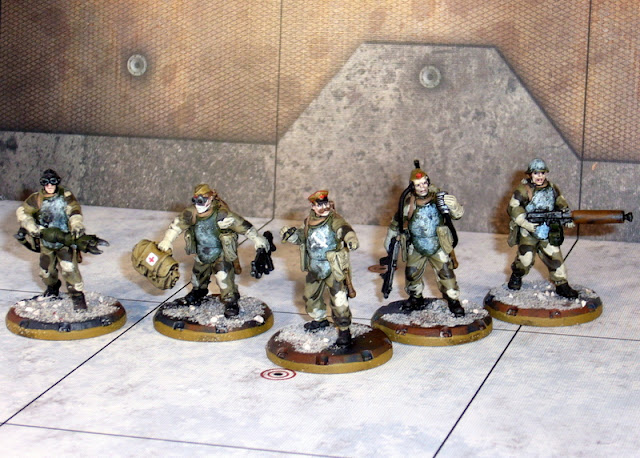 Gloves were all done with Khaki Highlight.  Hats and regular uniforms were done with Vallejo Khaki Grey with Reaper Phoenix Red piping and stars.  The combat webbing is Vallejo German Beige.  Boots were black with a dry brush of Reaper Walnut Brown and a Citadel Baadab Black Glaze.  Hand grenades were done in Vallejo Russian Uniform. 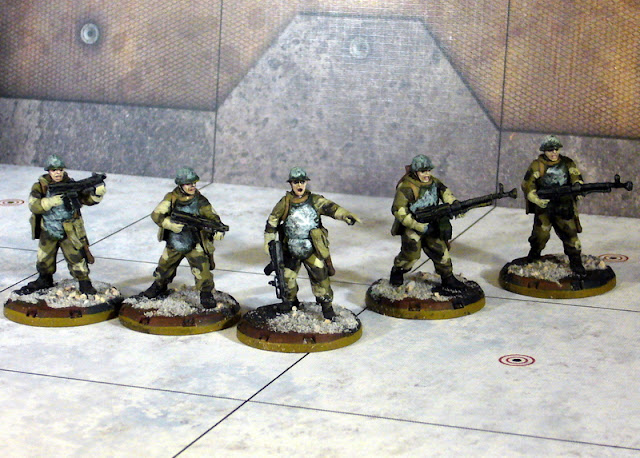 For each squad leader the figure came with a decal of a Soviet hammer & sickle on the body armor of each model.  I happened to have purchased some decals from Dust Models which are simply great for finishing off your Dust models, and helpful in giving a little extra Weird War II flair to any of your regular WWII model kits.  One of the sets has these same hammer and sickles.  The white decal shows up great over the white wash over green pattern and makes a nice subdued "I'm the squad leader!" designation. 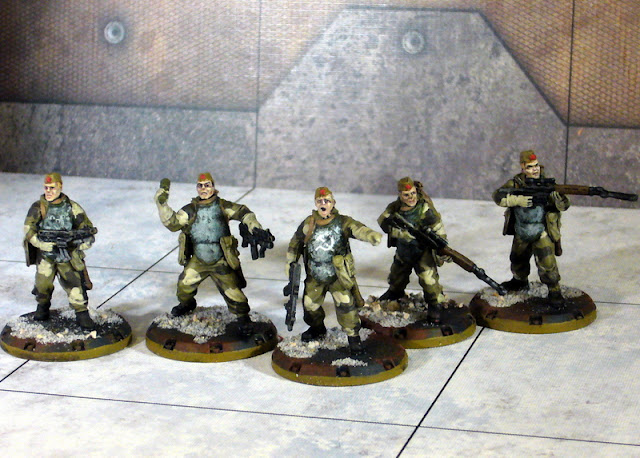 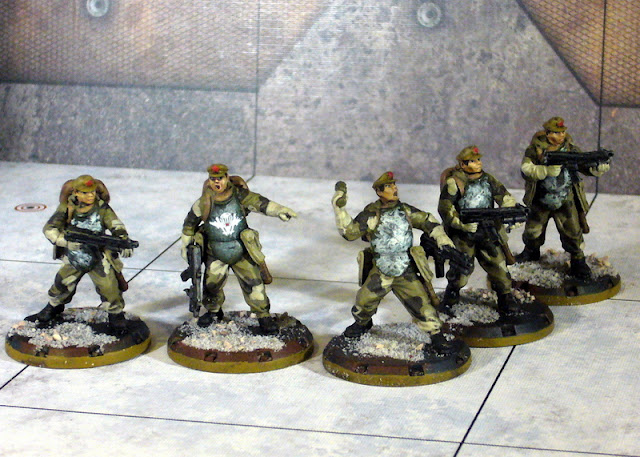 For the Chinese Volunteers Squad I used the Soviet Airborne insignia that came with the decal set as they came with the Mil Mi-45 Transport and the unit has the Air Cav trait which allows them rapid deployment from aircraft. 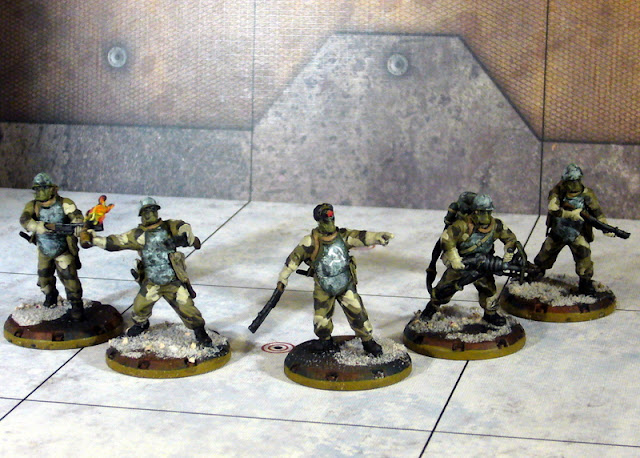 The Falkyeli Close Combat Troops are armed with shotguns and molotov cocktails and supported by a Sulphur Thrower (a nasty flame thrower that is even more effective against vehicles).  These figures came with their gear separate, which was different from the other Dust models.  The gear consisted of the entrenching tool, an ammo pouch for a sub machine gun, and a molotov cocktail.   I noticed the sculptor for this piece clearly didn't get the memo as the ammo pouch is curved to match the PPSh-48 sub machine gun (an interpolation between the PPSh-41 and the AK-47, but looks like an over sized MP-5) and not shotgun ammo.  Furthermore the part in no way fits any of the figures.  I was able to correct this by cutting each piece between the entrenching tool and the molotov cocktail bottle.  Then gluing the separate pieces to different sides of the model. 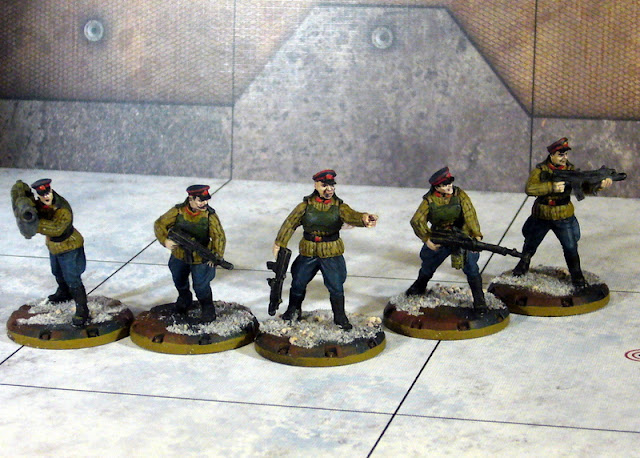 The Drakoni or Commissar Squad I had painted differently.  They are all dressed in the iconic quilted jacket with peaked hats, jodhpurs and jackboots.  They also have what appears to be a newer less bulky breast plate for their body armor.  I painted these guys based on some photos of some NKVD Commissars.  The dark blue pants and hats are Reaper Breonne Blue.  Details on the hats are Reaper Phoenix Red and Tarnished Brass.  The jackets are Vallejo Khaki Grey and the body armor is Russian Green.  Boots were done with Testors Gloss Black. 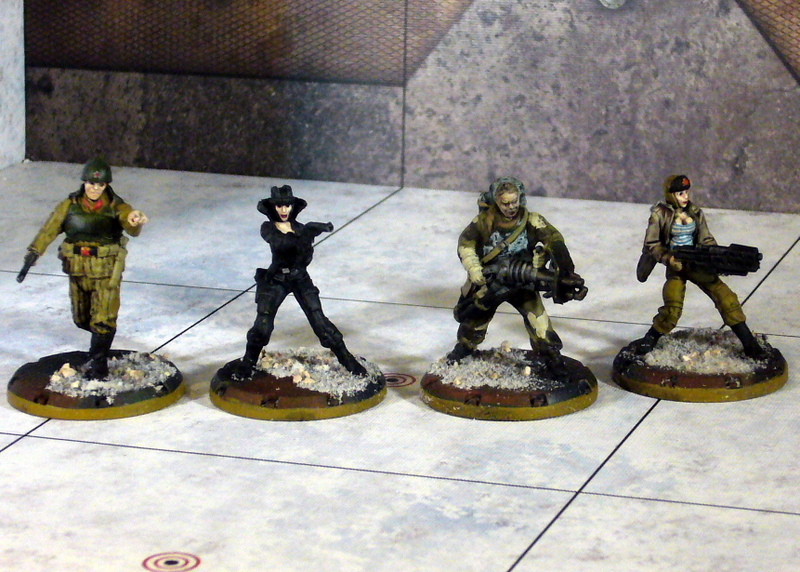 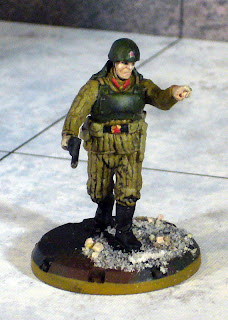 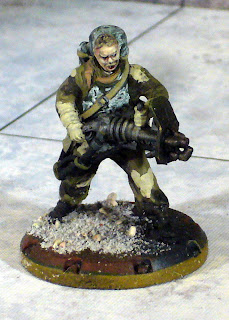 For the heroes, I painted Nikolai in the same manner as the Commissars. However his helmet I left without a white wash and I finished him off with a small red star on his helmet from my decal box. Yakov was painted in the same manner as the Falkyeli Sulphur Thrower, as they have the same body, just a different head. Red Yana was done with Khaki Grey pants a white t-shirt with blue stripes and the jacket was Reaper Stone Shadow with Citadel Delvan Mud Glaze. The had was Khaki Grey and the Fur was Reaper Walnut Brown. Koshka was done in an all black uniform inspired by Soviet Tanker uniform. Overall black with Vallejo German Grey highlights and then a coat of Citadel Baadab Black Glaze.   Boots, belt, gloves and holster were done with Testors Gloss Black. 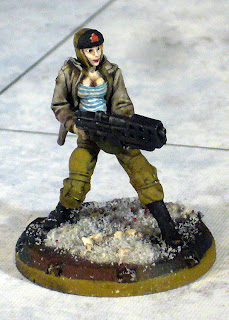 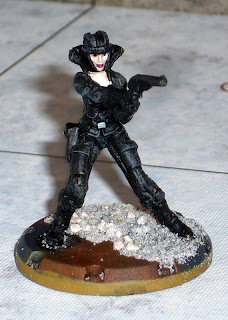