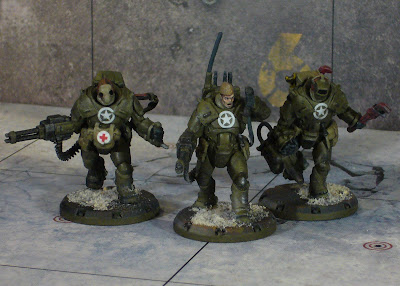 Finishing up my Allies army for Dust, I had all the power armor troops, heroes and a few more sets of regular troops I've accumulated since I did my first batch of Dust Allies.

For the Heavy Rangers I painted all of their powered armor in Vallejo Brown Violet.  The rubbery areas, gloves, boots, hoses and joints were painted with P3 Coal Black.  The Rocket Punch fist was painted with Citadel Golden Yellow.


Each of the power armor troops either had an Allied Circle Star or an ASOCOM insignia originally on it.  I so after painting all of them I replaced the Circle Stars with some from a Flames of War American Decal Sheet.  For the squad leaders I gave them some chevrons on the shoulder pad from a Dust Models Decal Sheet. 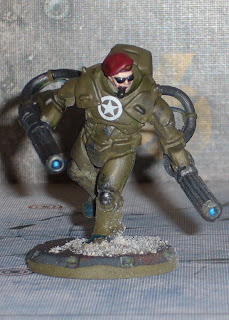 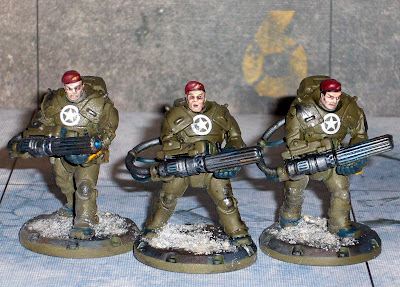 For the British Paratroops and the Allies hero Action Jackson, I painted the berets Reaper Red Violet and then hand painted a winged insignia on the beret in Reaper Tarnished Brass.  The Phaser Guns were painted with Reaper Blackened Steel while the barrel was then treated with a thinned glaze of Reaper Gunmetal Blue and acrylic floor wax.  The end of the barrel was painted with Reaper Scorched Metal.  Inside the barrel I painted it black with a dot of Reaper Polished Silver in the center, then added some thinned Vallejo Fluorescent Blue.  This makes a nice effective blue glow effect, that shows up real nice under bright lights.

Unfortunately some of the phasers, particularly Action Jackson's, suffer from the Dust Models Bent Barrel Syndrome. 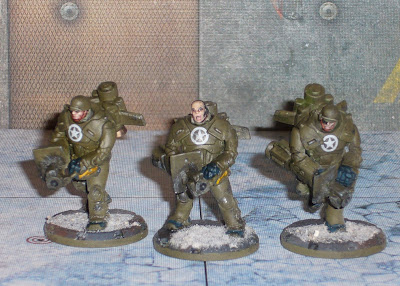 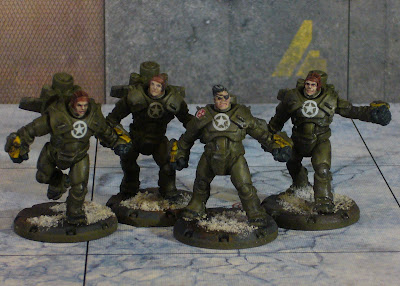 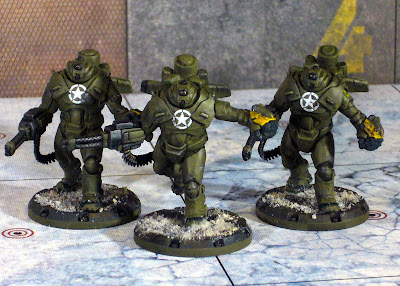 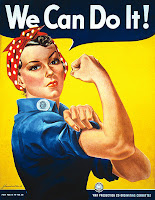 For the Allies Heroine Master Sergeant Rosie Donovan, I really didn't want to buy the Operation Cyclone Campaign set because I prefer to play Dust Warfare (the true miniatures game) and not Dust Tactics (the board game played with the same miniatures).   The Campaign set comes with  2 figures and some tank traps that are for use with both games but the rest is for Dust Tactics.  I couldn't justify the price, so I went about looking at making my own Rosie. 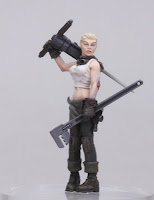 Master Sergeant Rosie Donovan is a mechanical genius, who helped implement the new alien technology the Axis acquired into Allies equipment.  She's also an expert tank killer and is armed with a customized bazooka.  She's inspired from the Rosie the Riveter propaganda poster.  Ironically, the concept art started as an Axis character called Bianca.


I started with the Reaper figure, Rosie, Chronotechnician.  The figure comes with an optional rifle or giant wrench.  Since the Dust Rosie has a giant wrench, naturally I had to pick that.  For the customized bazooka I started with a plastic bazooka from the Bolt Action plastic American Infantry.  The rocket magazine is from a Starship Troopers Mobile Infantry Rocket Launcher and the sight is some gun shaped bit I found in my bitz bin.  The ammo box is a resin case for some 1/48th scale WWII diorama and the loose rocket is from a 1/48 Tamiya US Infantry Set. 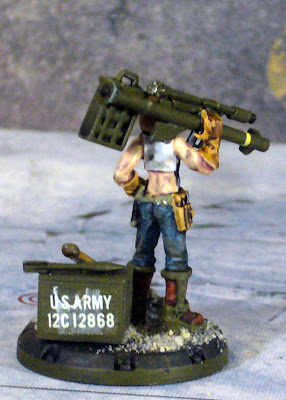 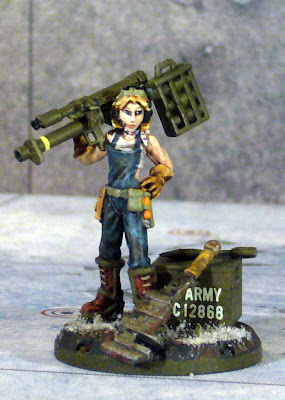 I then painted her to match the colors from the concept art as close as I can.  The denim overalls were done with Reaper Templar Blue, with a dry brush of Rainy Grey.  To simulate the oil stains I splotched some Citadel Baadab Black and Earthshade glazes on her clothes and gloves. 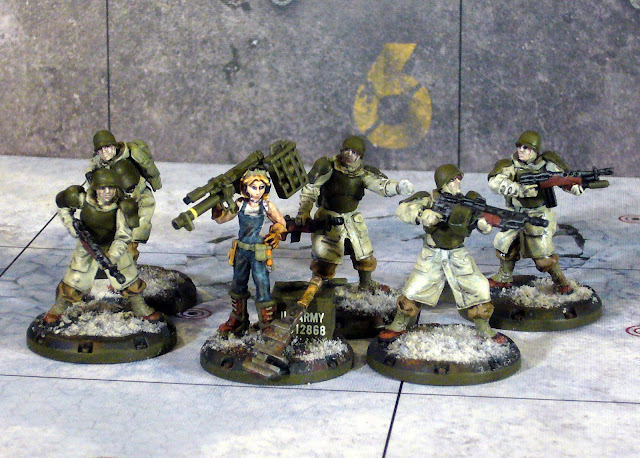 I acquired a number of Rangers since I did the first batch as well as a Sniper and Forward Observer Team.  I painted them the same way. 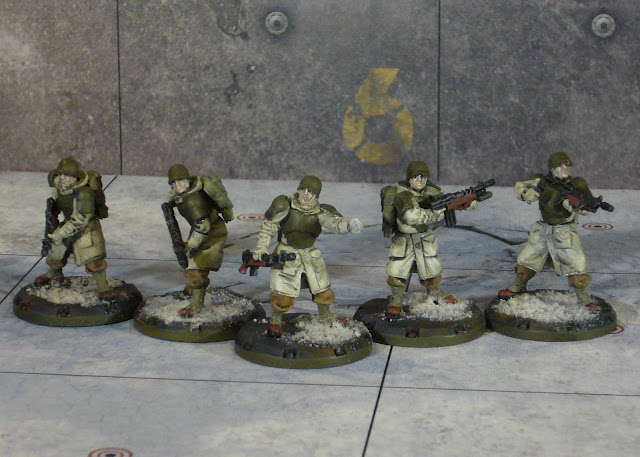 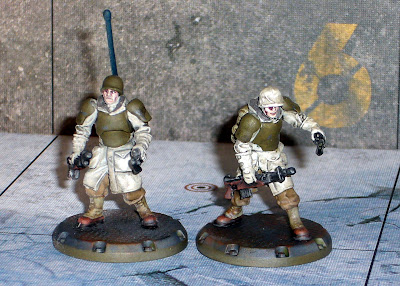 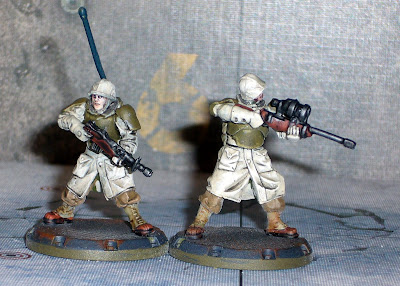 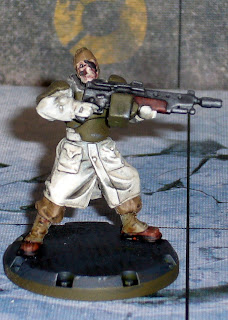 The hero Johnny One-Eye I painted the same as the other Rangers, as he's simply the Victory Gunner with a different head. 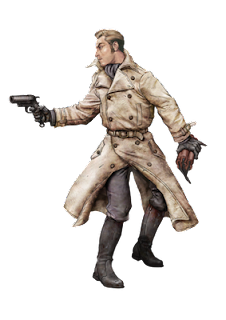 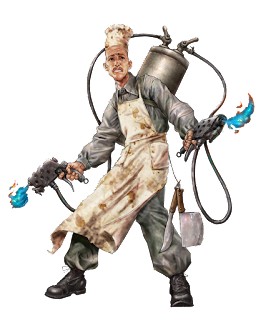 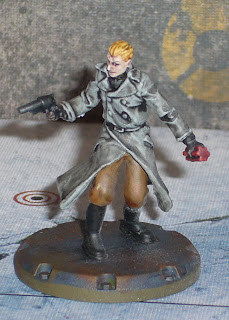 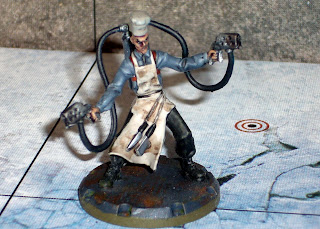 Posted by CmdrKiley at 6:05 PM