I've always been a fan of the good ol'fashioned pulpy retro-scifi.  You, know Flash Gordon, Buck Rogers, that sort of thing.

Anyways, I really fell in love with the models from Hydra Miniatures.  Both their Retro Raygun and War Rocket lines of models are simply fantastic.  I've also been dabbling around in some rule sets, Fantastic Worlds by Rattrap Productions and Slipstream from Pinnacle Products. 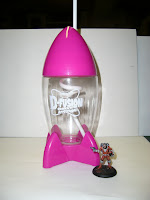 Taking a suggestion from someone on The Miniatures Page, one night after gaming I stopped at a local Denny's to have a late night dinner and to sample out one of their D-Fusion Rocket Cups.  So when my dinner arrived with my D-Fusion Drink I was so excited I went back out to my car, grabbed some 28mm minis some paper an and a pencil.  While eating dinner, I ended up sketching out some ideas on how to turn one of these marvelous cups into a rocket ship, and yes I was getting some strange looks from some of the other diners around me.  I ended up asking the waitress if I could purchase more of the cups.  She saw my sketches and sort of looked at me strange but then she went back and checked and got the OK.  I beleive I bought then at about $4 each. 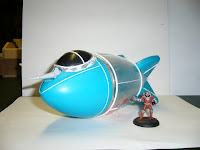 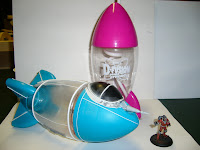 With my recently painted Galacteers in mind, I sort of envisoned these rockets as a Retro-SciFi UH-1 Huey Helicopter, dopping in low on a planets surface with big doors opening up to drop troops off as it skims the alien terrain.  It could also be an old workhorse, where surplus have been sold off from the military and are now in civilian use where the hulls have seen lots of modifications.  Next I started amassing my other materials for the work.  As this cup is made from non-polystyrene plastic, I couldn't use simple model glue to hold it all together.  So I had to use cyano acrylate glue (CA).  For the cockpit, I ended up using a plastic spoon.  A really nice domed shape cockpit was formed from using a spoon I obtained from the Q'doba restaurant near my office.  Cutting the handle off and filling in the gaps with epoxy putty.  The epoxy puttysticks well and required some filling and sanding to get the smooth surface howevever.  I framed in the cockpit with some thin strips of plastic from Plastruct.  The framing also helped hide the seam between the plastic spoon and the epoxy putty.  Simply cutting the length I needed, applying some CA glue and wrapping it along the surface and trimming the ends as necessary.  The hole where the coiled straw went in looked ideal for a weapons mount just under the cockpit.  I obtained a good retro looking ray gun from my bitz bin.  Some weapons from the Russian toy company Tehnlog's Robogear line worked great. 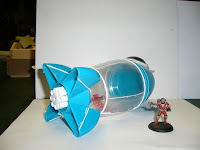 For the rocket motor, I used sections of Plastruct tube stock.  Simply cutting them to length using a miter saw and packing them into the center section.  Sort of giving the impression of a old retro styled rocket motor.  Sort of inspired by Buck Rogers, The Planet Express and the animated series version of Dr. Zarkov's rocketship. 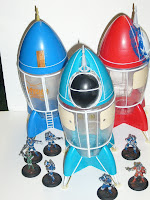 The landing gear were a bit more tricky.  They were built using brass rod and lots of CA glue with accelerant into the deep cavities of the fin sections.  I envisioned this thing being able to launch and land vertically and horizontially.  The landing pads were made from plugs found at a hardware store used to hide screw heads on furniture.  They were glued to a bead to represent a ball socket where the rods and the pad meet together.

I sort of envisioned that the horizontal landing mode would have the pads opposite to the cockpit to rotate 90 degrees and a gear to drop out from the nose cone under the cockpit.  Glued a photo-etched panel to represent the landing gear door under the nose.  Other panels were made by gluing on some paper price tags I got at a craft store.  The cargo doors were simply implied by bordering them out with strip stock and other parts from my bitz bin.

I coated these rockets using Testors Metalizer Flat Aluminum.  I sort of wanted a 50s-60s era jet airplane look about them.  So I dug up a bunch of old decals from model kits of planes from that era.  Also found some stuff like numbers and stripes from some NASCAR model kits useful too.

Unfortunately I don't have these finished yet because after a few play testing sessions of my Retro-SciFi variant of the No Limits! rules, my wife dropped some jumper cables on the box that stored these rockets and they have been damaged.  I'm still trying to repair them.

So these are the only pictures I have done of the semi-completed rockets.  I'll post more when I get these repaired.
Posted by CmdrKiley at 6:02 PM