These are some earlier conversion work I had made.

After the AE-WWII Occult Expansion book came out, it introduced some new occult related factions and some whole new creepy units.  Some of these units are required, called 'un-locking' units, that you need in order to field some other more powerful weird units in your detachment.  Two of these units necessary to field the weird occult units of the Waffen SS are the Schutzkommando SS, the Krieghexen, and the Vril Engineer.  Unfortunately, there are no official Darkson Designs models to represent these, so this posed an opportunity to get creative. 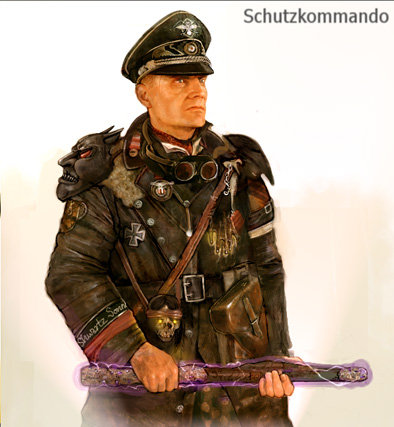 The Schutzkommando is sort of an evil tomb raider who collects all sorts of magic artifacts from around the world.  He's sort of a customizable unit that you can gear-up for each game.  He's also the main unlocking unit to all the weird stuff in a Waffen SS detachment.  You need this guy in order to field the Vril Engineer or Kreighexen, when those will unlock things like Hell Hounds, Vampires, Werewolves, Dragr, etc.

Taking advantage of Victory Force 40% off sale I snagged up some nice looking SS figures to build a nice Occult detachment and an excellent figure to make a Schutzkommando SS.Based on the Darkson Designs concept art and the model description, he's an officer armed with an MP40 submachine gun and has a choice of multiple magic items. I found this figure in the Victory Force catalog. Like many of the VFM figures this comes with optional hands, so I ordered an MP40 in the left hand and a hand grenade in the right (figuring I can snip off the grenade and put a staff or rod in his hand). The parts arrived within 4 days and I mounted him on a  ruined temple base from Micro Arts Studios .  The tech/runic stone look of the bases sort of fit in with theme I wanted for my SS Occultists. 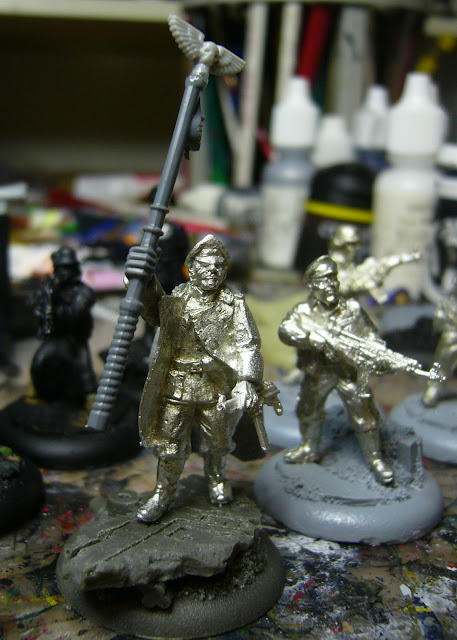 For the occult bitz I looked to my bitz bin and found a pole to a GW Dwarven Standard to use as my magic staff. The dwarven runes on it are perfect for some germanic runes. To top it off I snipped off the headpiece of a Space Marine Sergeant's "Hit me, I'm a Squad Leader with a Flag on my back to make sure you know it!" backpack standard. For some added flair I added a plastic cape from a GW Chaos Warrior. Nothing says gothic fascism like a GW product.

Of course I still need to clean up that nasty mold line down the pole before I prime this guy. Also I'm still on the fence about the size of dwarven hand. His left had seems quite big as well and I might be able to get by with painting it to look like a glove.  One suggestion I received was to make it sort of a Hell-Boy type of glove which I might go with.


The Krieghexen, War Witch, is the SS spell caster.  It's also an unlocking unit that allows you to field things like Werewolves, Vampires and Dragrs. 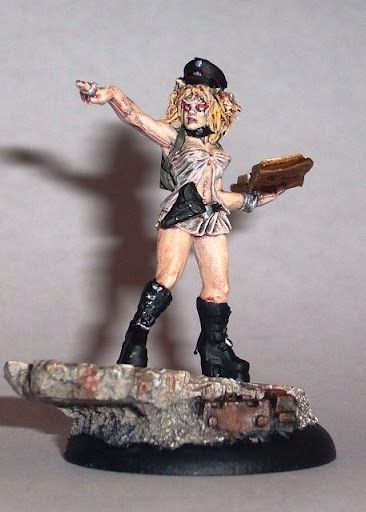 For my SS Krieghexen I took a different path from the Darkson Designs concept art.  Sort of going more pulpy I made a female Krieghexen from a RAFM goth chick cultist called Jil l Lucas, Cult Leader.

The hat is from a 1/48 Tamiya plastic German Officer. I had to carefully cut the head out from under it. Then clip off the top of her hair and after gluing the hat on, patch up the hair around it with green stuff.  I wanted it to sort of sit casually on top and most of all I wanted those horns just popping through. 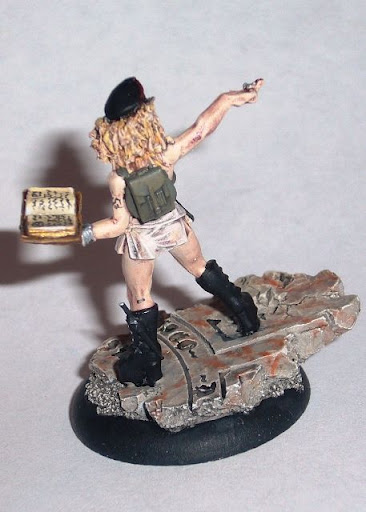 I painted her outfit using some experimental techniques in painting sheer cloth. Ironically I just finished her just before leaving for Gen Con, where I had a class on the same subject. Nice thing was some most of those techniques were the same ones I had been experimenting on myself.

The eyes were done normally with a black outline then a white center, but rather than finishing the eyes with an iris and pupil, I used some thin flourescent orange to give it the glowing effect. Her tattoos were added with a 0.05mm felt pen. She's also mounted on a Micro Arts Studios Temple Ruins base, which I sort of wanted a theme going on. I've been experimenting with doing a marble effect using layers of glazes.

The Vril Engineer is another unlocking unit.  He works with some mystical metal called Vril to enhance weapons and gear in his detachment.  Based on the Darkson Designs concept art, he's got all sorts of cybernetic enhancements, germanic runes, and tools on hand. 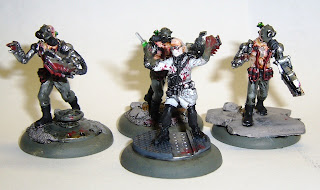 I started with the Darkson Designs Mad Doktor torso, and removed the bone saw from the back. I figured the smock he's wearing could just as easily be a grease stained technician's smock rather than a bloody mad scientist's smock. Since he's armed with a StG-44, I used the arm from one of the Trenchcoated Wehrmacht soldiers.  I used the right arm of the Mad Docktor with the syringe, figuring it to be sort of a tool like a screw driver and positioned it to look like he's making some Vril modifications on his rifle. 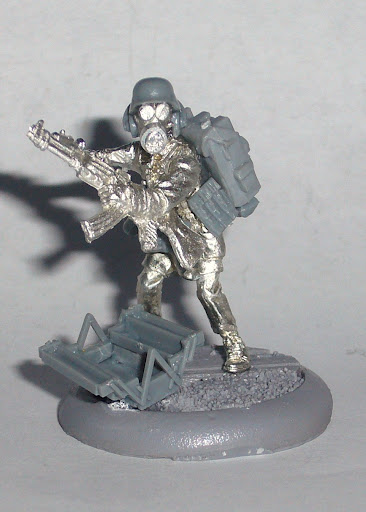 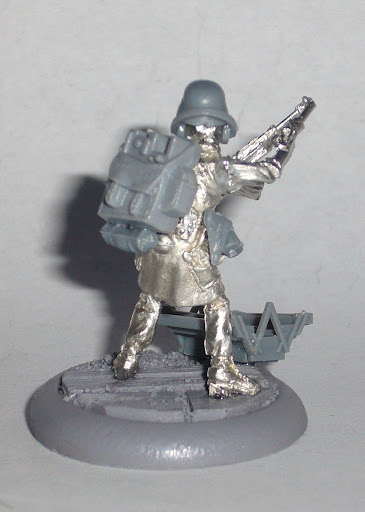 I used an Abgerzsoldat head, and trimmed the top and back off to allow a plastic helmet from a 1/48th scale Tamiya figure set on top. Also added was a headset, for some added techy look to him. I then added a pistol holster, pouches, and a tool bag from a Tamiya German Field Maintenance figure set. I then even found a tool box from that field maintenance set and added that to the base. The backpack is a GW Commo pack with the antenna removed. 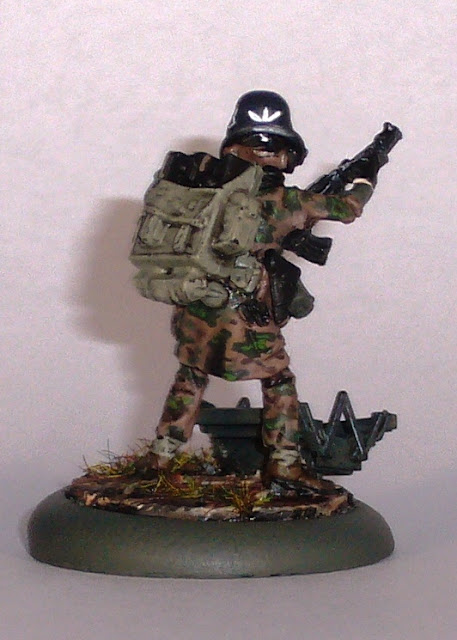 I painted him using SS Autumn Oakleaf camouflage pattern to match the rest of my SS detachment.  Doing some Google-Fu, I found some Vril runes to paint on his helmet.  Keeping with the looks of the concept art, I made some glowing eyes in the goggles using flourescent Orange and Yellow paint. 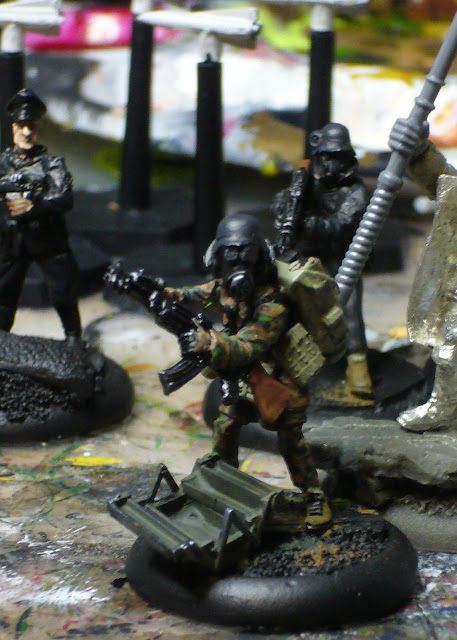 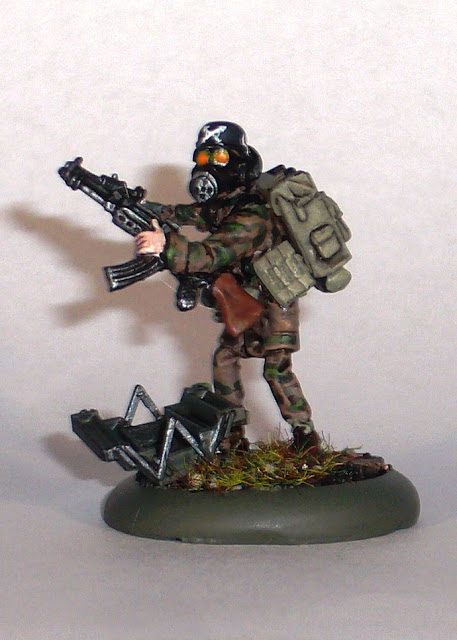 I was able to get these models done enough to use just in time for Gen Con.  Here you can see my Vril Engineer in action, preparing to upgrade an MG-42 Team and my semi-finished Schutzkommando making a successful tank assault on an American T-4 Tumbleweed Tank (just before the Buffalo Powered Armor Suit zaps him with his Telsa Gun). I added some germanic runes to his helmet similar to the SS Conscript pic in the Occult Expansion rulebook. Then I added some flourescent orange paint to the goggles to give him sort of an eerie magical glow.
Posted by CmdrKiley at 9:05 PM