I finished up the collection of Marines that I've had in storage for some time now. I've accumulated them a long time ago. They're official Starfleet Marines from Task Force games, I assume to support the original Prime Directive RPG. They were made by Harlequin Miniatures and sculpted by Kev White. 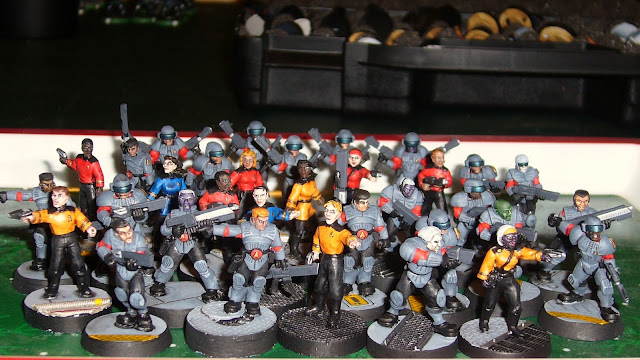 When I first got them, I never really considered them much for Star Trek as the weapons looked a bit too contemporary and not too keen on some of the poster'ish SMG in each hand poses. However the rest of them started to really grow on me and I dove into the Starfleet lore in some Captain's Log magazines. Some of the most exciting parts I like to read about are the marine actions that occur in the game.  Generally the entire action is resolved in a single die roll, but the fluff makes it so much more exciting and I've always wanted to do a skirmish game that really details these actions.

So I pulled them out of storage and painted them along with my Victory Force Miniatures stuff. To try to keep some sort of cohesion, I painted the clothing under the armor plates the same as the standard red shirts (black pants and red shirt). The dark blue grey armor was picked as it reminded me of the wartime uniforms during DS9 and TNG era and the colors just seemed to work.


These are the finished Starfleet Marines in Light Environment Suits. These are from Victory Force Miniatures Spacefarers line. 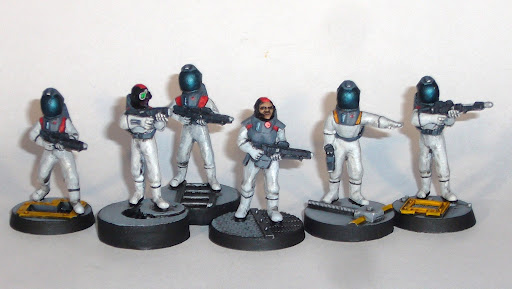 Trying to keep a connection to the classic Star Trek I used colors from the old classic Starfleet space suits (as seen in The Tholian Web). Also sort of combining that with the TNG ear suits seen in First Contact. I even used some metallic red and blue for the details on the hard spots on the suit. The soft part of the suit was done in Reaper Misty Grey with Vallejo Metallic Medium over it as I didn't want the suit to look too silvery.  I also painted an Enterprise Arrow (the Starfleet insignia in the Starfleet Universe) on the left shoulder of each mini.

The visors were done with Reaper Gunmetal Blue Metallic over black with several coats of black glaze over that. They look pretty dark except under bright light.


These are the finished MegaMinis Starship Crew. Since they come with integral bases I had to cover them up with turf. Not really impressed with the turf I used, looks sort of cheap (like it came off of an old Star Trek set I guess). 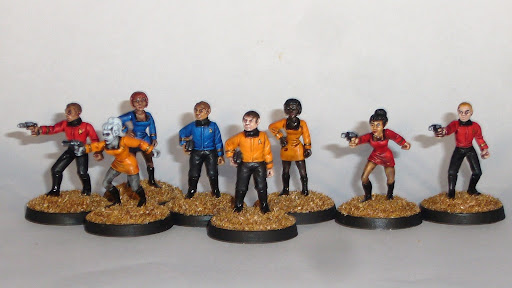 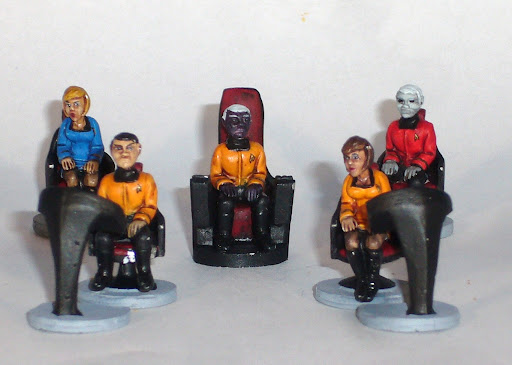 These are the MegaMinis Starship Crew that come seated. They make a great Bridge Crew.  Sticking with the Starfleet theme, I painted some of the crew in races seen in the Prime Directive RPG such as Rigellians and Cygnians. 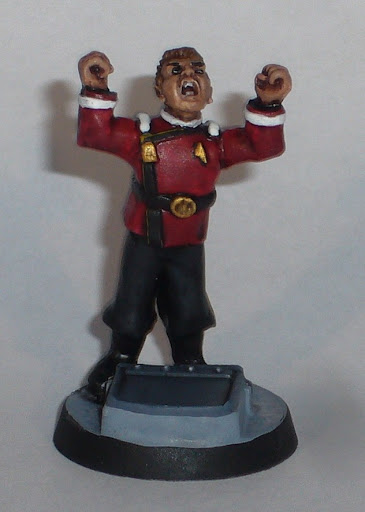 And of course I had to finish this off with my distraught Starfleet Admiral from Victory Force Miniatures. He's part of their humorous Red Shirt Follies line.  His uniform matches much closer to the canon Star Trek movie era uniforms and not the Starfleet Universe ones, but what the hell.  Clearly things did not go as well as planned. I guess he hasn't figured out how to beat the no-win scenario yet.

What's next? I got an Orion Slave Girl and a bunch of Kzinti Marines on my workbench right now.