Some more work I've been doing.  Coming up with some decent Kzinti figures.  I snagged up some Togorian Soldiers from Star Wars Miniatures from The Miniatures Market pretty cheap, about $0.50 a figure.  These proved to be the perfect size and build that matches Amarillo Design Bureau's concept of the Kzinti for Starfleet Battles.  I'm basing my models off of Adam Turner's sketch of a Kzinti whom I absolutely love all of his work he's done for ADB.

I've also been collecting some Kzinti figures from Dark Sword Miniatures.  These will be my fully armored marines.  These are based on actual Larry Niven Kzinti from the Man-Kzin Wars stories, in fact the models involved were from a Larry Elmore cover for one of the books.    However these will need some work in order to match the SFB Kzinti and my Togorians.  First of all the tails need to be removed, SFB Kzinti don't have tails.  Secondly the legs need to be redone to be more catlike and less human.  That's going to be a bit more work.

In the meantime I got a bunch of these plastic Togorians and started cutting away.  The vinyl proved to be firmer than I expected, I generally find the miniatures produced by Wizards of the Coast to be too soft and flimsy.  Despite the firmness, all the super large bases were warped like potatoe chips.  I planned to remount them anyways on standard slotted bases.  So using a very sharp X-Acto knife I removed them from the bases and started cutting their arms at the joints.

I found the Tau fire arms to be ideal for the size of these models.  The tiny human sized blaster pistol just looked silly for these guys.  Tau pulse rifles needed some trimming to fit in the hands and I was fortunate enough to reposition the arms in various poses.  Unfortuantely all of them are left handed. 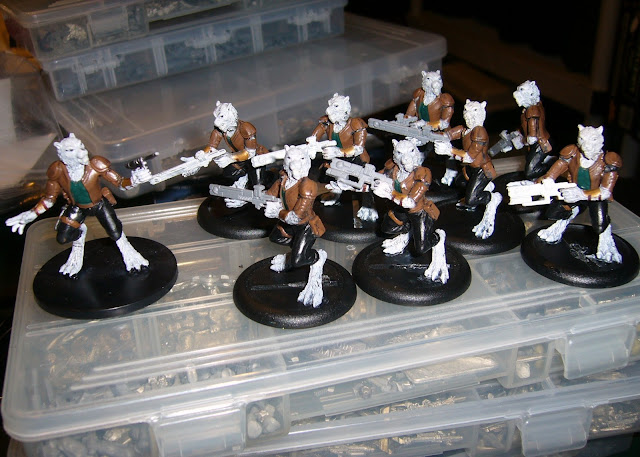 For some of the heavy weapon specialists I took the same Togorian soldiers and modified some more Tau heavy weapons from my bitz bin.  I have a missile launcher (because anyone who's played Starfleet Battles knows Kzinti love guided missiles) and a Heavy Disrupter Repeater Cannon.  To finish things off I made an officer with heavy disruptor pistol  This was a Grymn blaster from Hasslefree Miniatures.  It matched the style of the Tau weapons and just looked like a heavy disruptor pistol in the hands of a giant cat person. 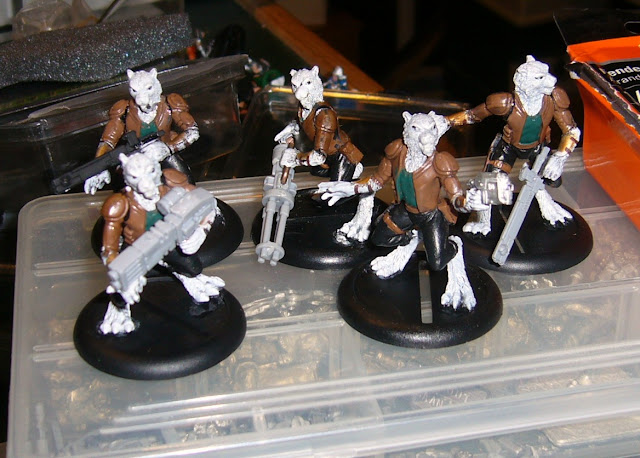 Now I have enough Kzinti to fill out a pretty decent Marine detachment.  Next to work on the other factions. 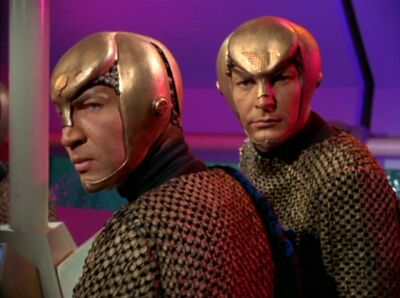 While digging through my Heroclix figures bins looking for parts I came up with these that pretty much said to me 'Romulan'.  First is the Hive Trooper from DC Heroclix.  The helmet really reminded me of the helmets used by the Romulans in the old classic series but with a face visor.  Trying ot the figure on it's own I found it to be too small and I couldn't find a rifle small enough to fit.  Seen here is a Junkers combat shotgun from Void 1.1.  Next I found a Shi'ar Warrior from Marvel Heroclix.  The body seemed better proportioned and came with a rifle I could use.  I trimmed off some of the 'looped pipes' on the rifle and added the remains of the blaster pistol (minus the always bent barrel) that I removed from all those Togorian Soldiers. 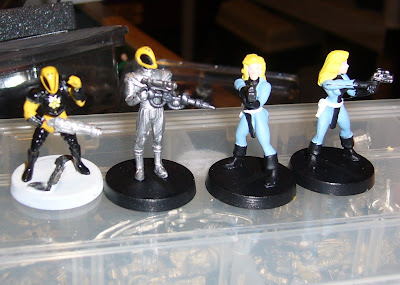 The other figure I found was the Science Police Officer from DC Heroclix.  She'd make a good Romulan Crewmember.  Best of all her hair covers her ears so I don't even have to attempt to put pointed ears on her.  I think with a simple paint job to match the classic Romulan uniforms I can attempt to make her fit in.  If I'm abititious I might use some greenstuff and give her a miniskirt.  As I don't have enough models yet to even make a Preatorian Team, I guess I've got time.  I may also pick up a few of these Pointy Eared Rim Aliens from Gary Mitchell's Space Vixens from Mars line.

Now the Orion Cartels can be pretty easy as they are made up of pretty much all races within the Starfleet Universe and really don't have any uniform and ethnic Orions simply look human. All that's really needed is to paint their skin green.  However, one iconic Orion is the Slave Girl.  Now in the Prime Directive RPG, there is a Prestige Class called Slave Girl and it's more of a Geisha (or Companion for you Firefly fans) than a slave.  In fact they are useful for espionage and assassination and can be quite useful in the Orion Pirate Crime Teams. 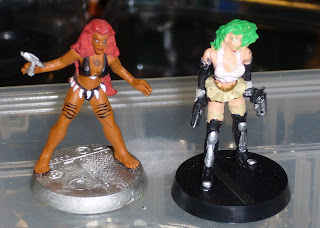 I found these models that sort of said Orion Pirate to me.  First of all Tigra from Marvel Heroclix just really said Orion Slave Girl.  I had to remove her tail and I came across some great weapons from Astro Miniatures.  I plan to fit the ones that resemble Federation Phaser IIs to my Federation crew figures, the ones that resemble Klingon distruptors to my Klingon crew, and possibly my Romulans (as the Romulans had a modified version of the Klingon Disruptor in the original series) and these other retro-sci-fi looking ones look good for just about anyone else.   Adding this to into her hand.  I had to use my knife to split her fingers a bit and then one at a time bend them into the pistol grip while wet with CA glue and apply a spritz of accelerant.  I think I might add a dagger to her other hand.

The other figure, Aphrodite IX from Heroclix Indy, really just said gun fighter or pirate than slave girl.  I may just keep her as is and paint them both green.  In the meantime I can use just about any other scoundrel looking human model to represent an ethnic Orion, human, Rigellian, Cygnian member of the Orion Cartels. 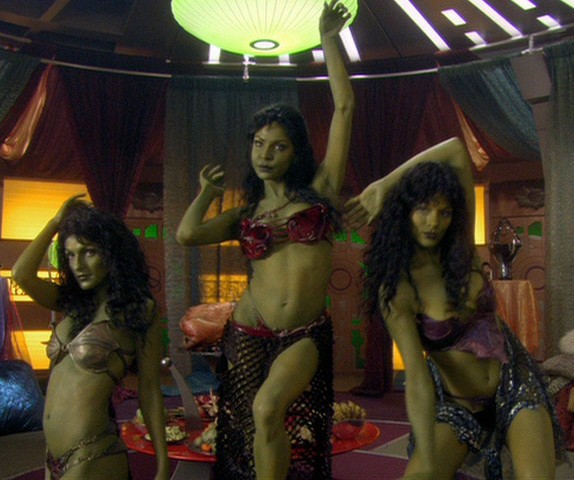 Update 01/22/12 - With my Project: Captain America finishing up I can focus on my Starfleet conversions.

The Kzinti were done using Vallejo Green Ochre with a brown inkwash.  Then highlighting the chest and face areas with Vallejo Ivory while gradually adding white to highlight.  Stripes were done with Reaper Pure Black, thinned down with acryllic floor wax and the finer parts were done with a 0.5 mm felt tipped pen.  I tried to match the pattern established by the concept art, followed up with some close-ups of actual tiger faces.  Eyes were done with P3 Ember Orange with a black slit from the pen. 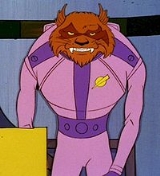 At first I wanted to try to reference the Kzinti from the Star Trek animated series for ideas for uniform colors.  After doing a quick Bing-Search I now remember why I didn't remember what colors they were.  The Marine uniforms are done using Reaper Aged Brick Red for the jacket, Vallejo Ultramarine Blue for the shirt (which I determined that the shirt color would determine the department like Federation crew, in this case Blue means Marines for Kzinti), and P3 Coal Black for the pants.  Ranks were done with painting a strip along the collar.  P3 Ember Orange for enlisted, Reaper Viper Green for NCOs and Reaper Lava Red for Officers.  The weapons were done with Reaper Rainy Grey.

The Romulan uniforms were done with Reaper Burnt Metal and then the Commander has Reaper Metallic Red along the right side of her uniform.  The lower ranks have Reaper Gunmetal Blue on the right side.  I'm not sure if I really want to do all the checkered patterns on the uniforms as the metallic colors tend to add some variation in the uniform itself.  The marine helmets and body armor is Reaper Brass with Polly S Copper highlights.

I removed the guns in the DC Heroclix Science Police figures hands and replaced them with the Klingon Distruptors I got from Astro Miniatures.  Weapons are Reaper Honed Steel.

The Greenstuff miniskirts came out pretty good.  I had to clip off the loincloth parts that hung on the front and back as they hung below the hem of the skirt.  I painted the exposed legs bare flesh and I think the miniskirt look came out pretty convincing.  I plan to add some black glaze to simulate stockings as in the example of the Romulan Commander from The Enterprise Incident episode.  The skin is done using Reaper Golden Flesh Shadow and Golden Flesh.  Then adding a slight amount of green ink to P3 Fleshwash and thinning it with acryllic floor wax.

The Orions were done using Reaper Viper Green as a base color with highlights by mixing some Golden Flesh to the Viper Green.  Then inkwashed the flesh with a green ink mixture with a drop of P3 Flesh Wash.  Following the examples from the classic Trek, I painted the hair black with Reaper Slime Black as highlights then followed with Citadel Badab Black glaze.  Eyeshadow was done with Vallejo Bronze on the slavegirl and Reaper Gunmetal Blue on the pirate girl.  Lipstick was Reaper Conch Pink with a Citadel Baal Red glaze.

The slave girl I went with a metallic bikini and used Reaper Copper Orange with black stripes.  The claws/teeth along the belt were Reaper Stained Ivory.  The pirate girl, I decided to go with the slutty space pirate girl and stick with colors inspired from some Halloween costumes.  The armored leggings, elbow pads and gloves were Vallejo Black Grey with some highlights by mixing Reaper Honed Steel and then covering with P3 Armor Wash.  Painting an Orion Pirate symbol on a black field on her top and then adding some brass detailing to her pistols.  Then some gold, brass and silver details to finish her off.
Posted by CmdrKiley at 11:59 PM