Finally, I've completed my IJA Detachment. These are from the Bolt Action Miniatures set by Warlord Games as well as the Darkson Designs Hive Soldiers and Bulletman.

The Kempei-Tai figure is from the Bolt Action set, I painted the armband on him to indicate he's Kempei-Tai. Unfortunately I couldn't find any photos that showed the entire armband so I and drew the characters on the front based on what I could see.

The Bakuhatsujin (Exploding Man) is infested with such virulent diseases. He's released at the beginning of a battle and charges towards the enemy infecting all in his path. At the end of his short life, which only lasts several turns, he explodes.

He was painted using pale flesh colors then added some Gryphon Sepia and a little bit of Thraka Green Glaze around the wound areas to give him a sickly look. The open wounds were done with thinned Red Ink with a little bit of Black Ink. The wafting clouds were drybrushed white over the flesh and then added lots more of the glazes to give it a cloudy effect.

The Subakojin (Hive Men) are soldiers that have developed a symbiotic relationship with disease carrying insects. They have formed a hive within the body of the soldier. The soldier can summon clouds of these insects to attack and harrass enemy troops. Should the Hive Soldiers loose their cool (Drive reaches 0), they loose control of the hive and the insects consume the soldiers from inside out.

They were painted up along with the rest of the infantry. Then I painted around the swarm some of the Red/Black ink mix to show open wounds. The swarm was painted black with lots of various colors, including some metallics for the various bugs and lots of white dots to represent maggots.

The BA boxed set comes with 3 different standards (IJA, IJN, and the Japanese Flag) as well as some devotional flags to hang off the rifles. The flags were cut out and I used ample clear scrap booking glue betweent them. While it was still wet, I then bent and twisted the flags. I bought another box to make an IJN detachment now.

The IJA uniforms were done using Reaper Terran Khaki and Khaki Highlight and them I made a glaze using Vallejo Japanese Uniform (a color I forgot I had in my drawer).  I used Vallejo Brown Violet for the Helmets.  Reaper Oiled Leather with a Delvan Mud glaze for the combat webbing. 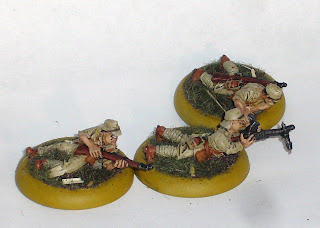 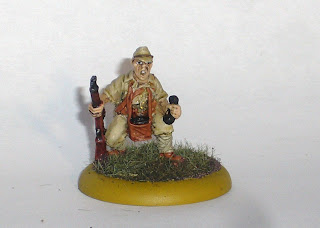 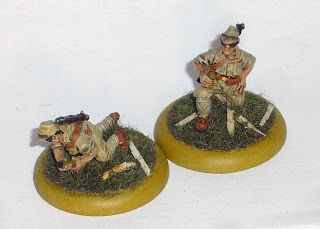 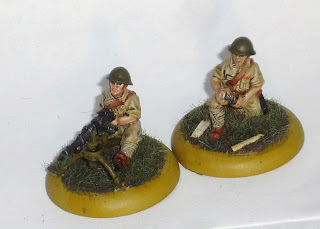 Posted by CmdrKiley at 5:19 PM