I've made most of these from Victory Force's Spacefarer line. There's also some Mega Minis Starship Crew in there. I also have a few of the official FASA movie era figures (true 25mm and not very good sculpts, I've only got them here because I'm just doing all my Trek stuff at once) and some of the Last Unicorn Games (all TNG era) and there's some Not-Star Trek figures from Matakishi's Tea House. The minis are intended for use with Amarillo Design Bureau's Prime Directive RPG (based on the Starfleet Universe of Starfleet Battles and not the canon Star Trek Universe) and I'm trying to maintain the classic uniform look. However some of the sculpts have some variations on the uniform that range from pre-TOS (like seen on the pilot The Cage) and some that lean more towards TNG era. The artwork in the Prime Directive RPG shows variations in the uniforms that range from straight out Classic Star Trek to a sort of blend of Classic and TNG. So that's what I did with the VFM figures, and I'm really liking the Classic/TNG blend to the uniforms. Pretty much a Classic era uniform however the shoulders are black like the TNG. The insignia and rank stripes remain more like the classic style. 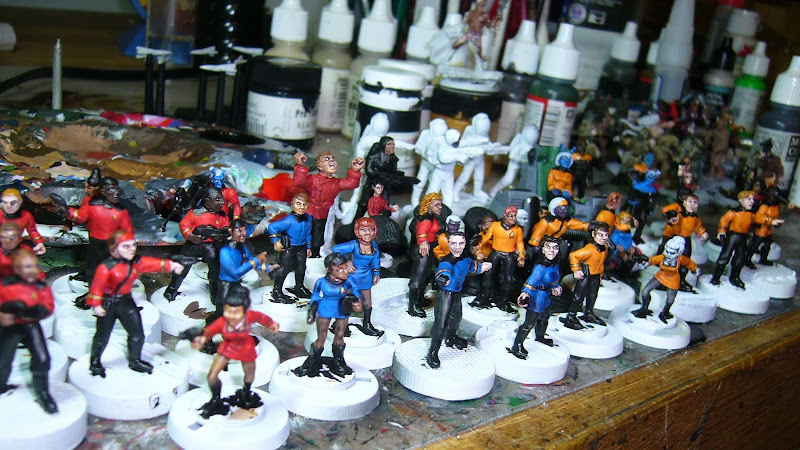 I've tried to paint a few of the crew to resemble some of the races found in the Starfleet version of The Federation, namely Cygnians and Rigellians. The Cygnians have a pastey white skin with white hair and big solid black eyes. The Rigellians have dark purplish skin with red and black markings on their skin (I still need to work on that) and white hair.

VFM also makes an Alternate Universe version of the same Spacefarer sculpts. These have daggers, sashes, extra medals and of course the evil goatees on them. I took those figures and painted them up to look like the classic era Klingons instead. 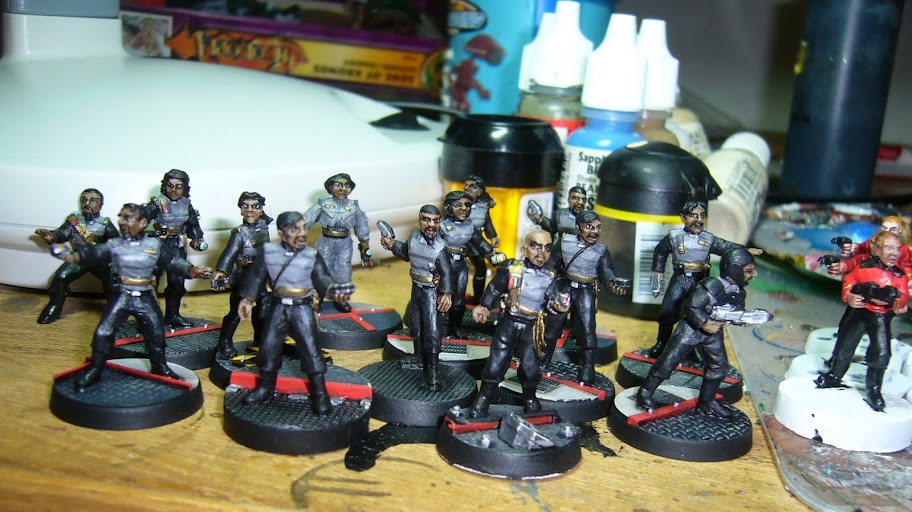 Basically the same figures as the VFM Spacefarers. However, not only did I use different colors but tried to replicate the vests that the Klingons had. Any figure that didn't have a goatee, got a skinny manchu moustache instead (done with a fine felt pen). The skin colors were basically Reaper Olive Skin shades but I went heavy with the black around the eyes.

I've got some of the VFM Marines and Space Suited Spacefarers which I intend to paint up as Starfleet Marines. I also dug up some of the old Harlequin Starfleet Battles 28mm figures out of my collection too.
Posted by CmdrKiley at 9:32 AM