You probably didn't know this but May is Zombie Awareness month.  Are you aware of zombies?  Well you should be.  And it's probably about time to get aware of just how many zombie models I have.  I love zombie movies and I love zombie games.  Zombies are a great scenario in miniature wargaming, hordes of difficult to kill units who take no morale tests and who's numbers increase as the kill the living.  In fact, just about any game is more fun with zombies in it.  Typically zombies are not much of a threat on their own or in small numbers.  Just about any yahoo with their wits about them can dispatch a few zombies with a baseball bat, even cut through swaths of them with a chainsaw.  However when in large numbers, zombies really become a serious threat.  So naturally I needed lots of zombies, and in my collection of zombies I've tried to get a zombie for just about every walk of life, just like in the movies.  I pretty much have zombies in several different genres. 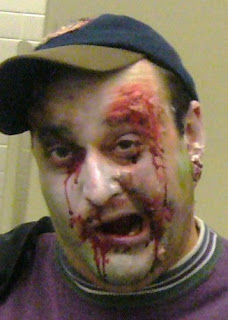 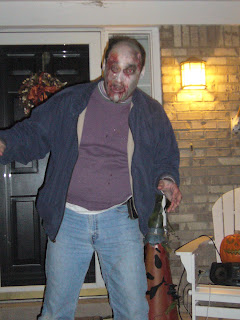 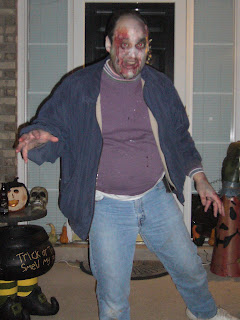 Fantasy - Your typical D&D Monster Manual Zombie.  These are zombies are Celtos zombies from Brigade Models. 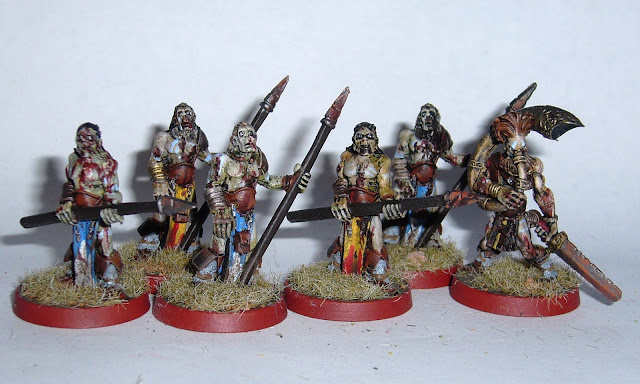 Weird War II - What's Weird War II withouth Nazi Zombies?  Well, that would be AE-WWII but I digress.  However I do use these for Incursion and Secrets of the Third Reich.  Many of these are West Wind figures for SotTR and Incursion, some of the others are from Reaper's Reich of the Dead line. 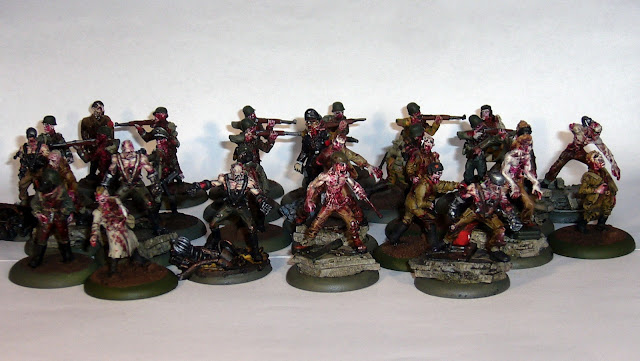 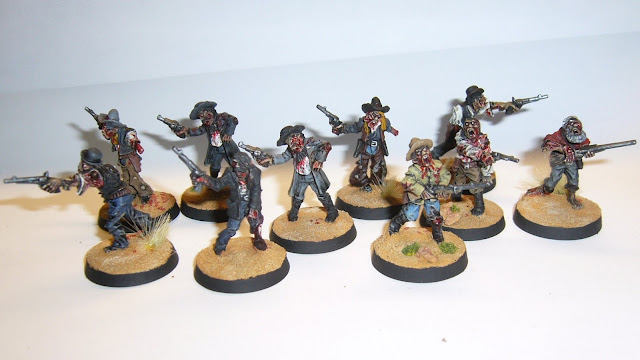 Pirates - Got to have undead pirates.  That would be like Pirates of the Carribean without Cap'n Jack Sparrow.  Sadly, I do not have any completed undead pirates to post up yet.  I'll have to post up the Booty n/ Brains craving zombies up in a later article.

Contemporary Zombies - Your modern to near future zombies that inhabit most of the sci-fi horror movies you see these days.  Today, I'm going to focus mostly on these zombies. 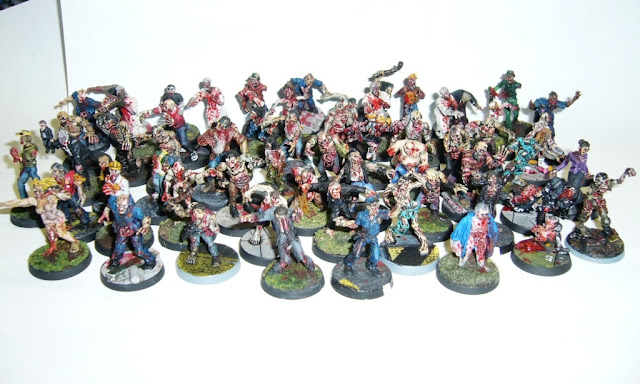 At my last count I had completed painting over 100 contemporary zombies.  Enough to flood the streets of any 28mm 4'x4' gaming table and send survivors running to the nearest S-Mart for shotguns and chainsaws.

I just finished up some more contemporary zombies recently.  These are from Victory Force Miniatures line of zombies, B-Ball Zombie and the Chicken and Dinosaur Mascot Zombies.  In fact right now Victory Force is running a Zombie Awareness Month Sale with some new zombie mascot releases too! 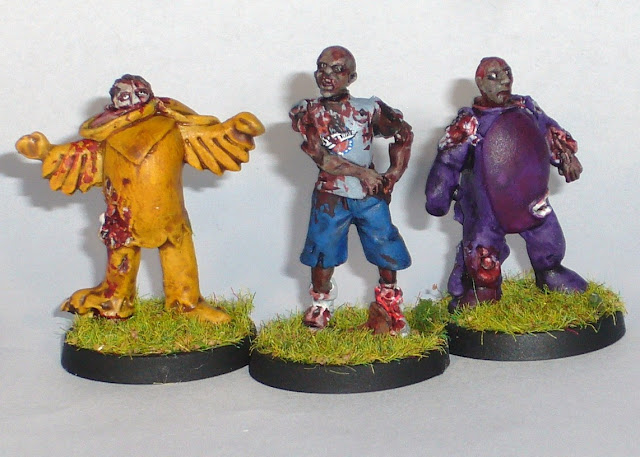 Studio Miniatures makes some excellent contemporary zombies.  I picked up these two sets.  Both are hospital related, because just like in the movies zombie plagues seem to start there.  In fact the Zombie Survival Guide recommends that you stay well away from these places during a zombie outbreak. 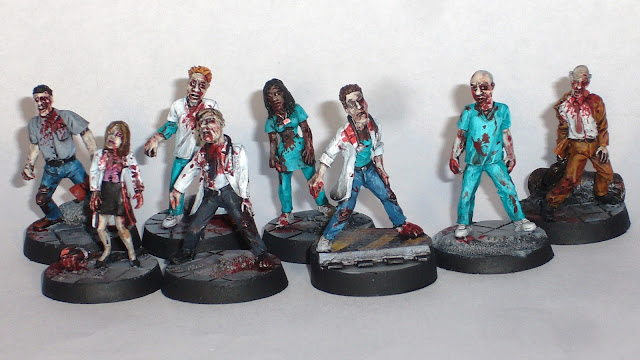 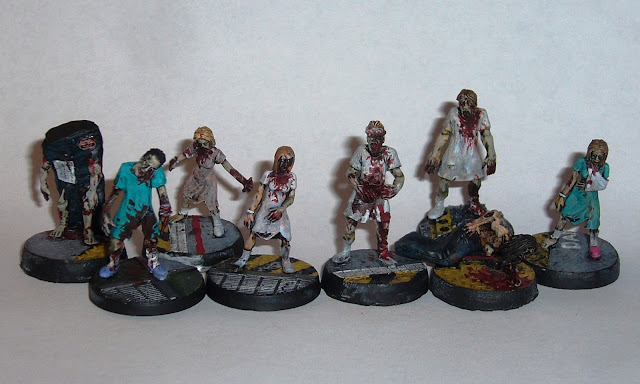 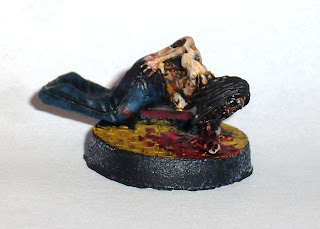 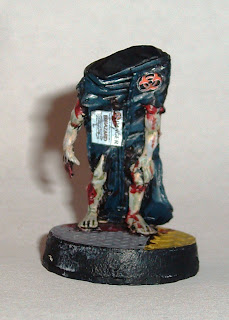 I particularly like the Body Bag Zombies.  I was able to find some biohazard decals from Hasslefree Miniatures which worked really well here. I've been picking up an eclectic collection of zombies from all sorts of manufacturers.  Reaper Miniatures came out with these not too long ago.  Some just have some rather tongue-in-cheek humor sculpted into them.

Zombie Strippers, probably inspired from the movie.  I love how the one has a severed hand with cash in her hand, and no I have not seen this movie....yet. 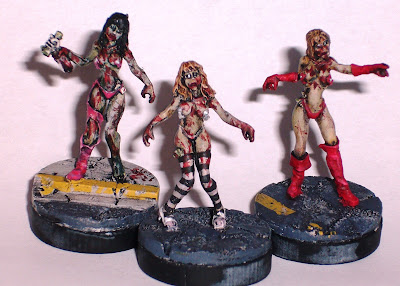 as well as Zombie Plus-Sized Lingerie Model munching on someone's foot and Zombie Stephen King Look-A-Like (which sort of reminded me of that scene from the Dawn of the Dead remake where they were sniping celebrity look-a-like zombies). 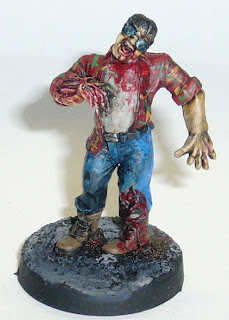 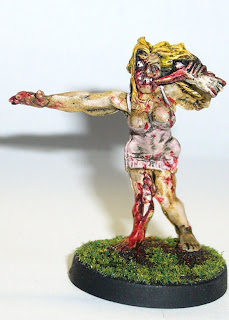 Hasslefree Miniatures makes some great zombies and even has some zombiefied versions of their Zombie Hunter line.

One of my favorites is Ashlee Campbell (a sort of female version of Ash from Army of Darkness, played by Bruce Campbell.  Get it??).  I really like how Kev White modelled the pistol dangling in her hand with the slide retracted like she just ran out of bullets before getting overrun by zombies. 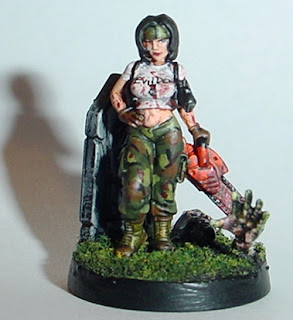 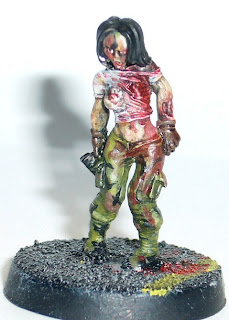 Another being a zombiefied version of Simon Pegg's cricket bat toting character from the most hilarious movie Shawn of the Dead. 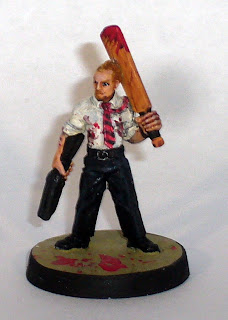 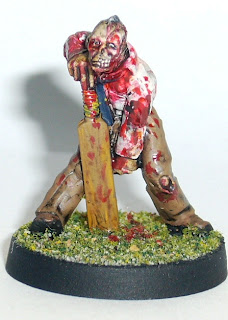 To build up the bulk of my zombie horde, I've even resorted to some cheap sources of zombies.  Wizkids Horrorclix line has many zombie figures that are quite useful and although OOP can be still found fairly cheap.  If you're not familar with Horrorclix, or Heroclix for that matter, they are randomly packed prepainted miniatures.  I find the prepaints poor quality and in most cases not worth the price they're asking for, especially when they're some super rare figure with super powered stats on the base for the game.  However, I'm only interested in the figure for other uses, I was never impressed with Heroclix or Horrorclix.  Some of the more common figures I've been able to get as low as $0.15 a figure online.  These I simply pop off the clix base and remount on a standard 25 mm base.  In some cases I have even bent or cut off and repositioned the limbs or head to vary them a bit. 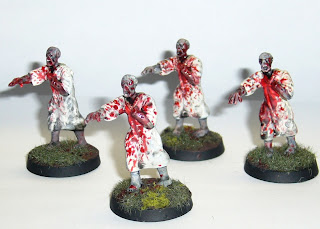 Zombie Patients, to go well with my whole hospital overrun with zomibes theme.  I've accumulated a horde of these things.  I had fun varying the blood splatter from the severed hand. 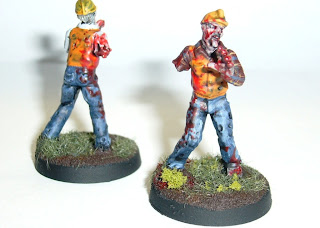 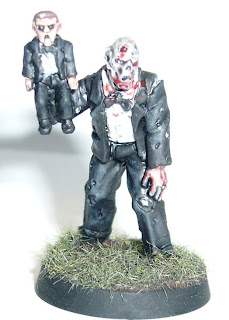 Zombie Ventriloquist - Well, part of my 'a zombie for all walks of life' project. 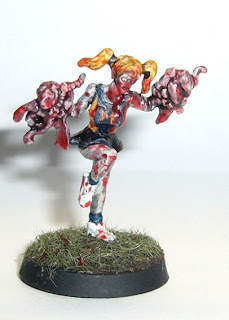 Zombie Cheerleader - Of course, got to have a zombie cheerleader.  Those aren't pom poms in her hands, those are human entrails! 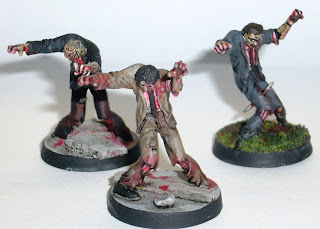 The there's the Attack of the Zombie Laywers!!!! 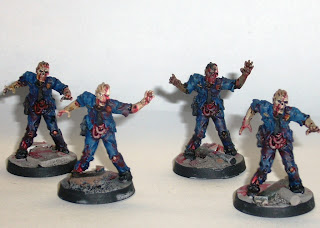 And of course the Zombie Cops!  These I was able to vary the poses quite a bit to keep my horde from looking too 'cloned'.

Any fan of the Resident Evil movies, has to have some Zombie Dogs!  These Frothweilers had some spines sprouting out of the back.  I removed them and repainted them to look like the RE Zombie Dobermans. 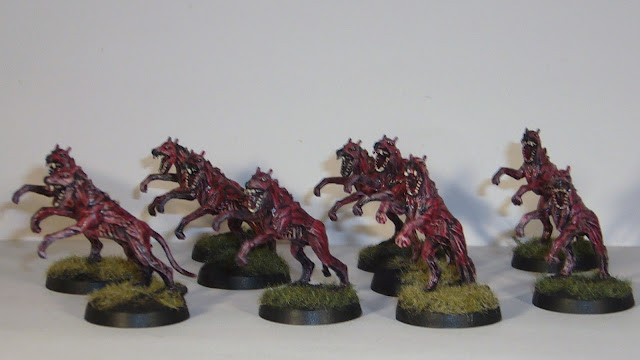 Anyways, if you wish to see more of my zombie collection check out my Picassa Gallery of Zombies here.

Posted by CmdrKiley at 7:04 PM