Happy Star Wars Day, May the Fourth Be With You

Friday was May 04, Star Wars Day, and I was too busy to post up some of my latest work.  At least I did finally get to sit down and watch Star Wars Episode IV on Blu-Ray that night (I was pretty beat that night). 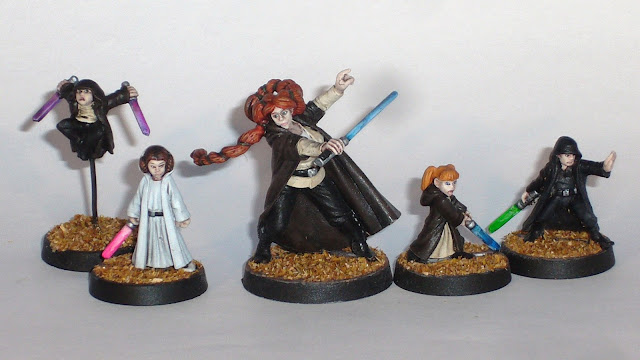 Several years back Kev White of Hasslefree Miniatures did some awesome Not-Jedi figures of his wife, Sally, and kids; Jen, Kieran, Megan, and Luke.  One of which, Jen,  I simply had to get because it reminded me of my daughter Sydney when she was 4 and wanted to be Princess Leia for Halloween. 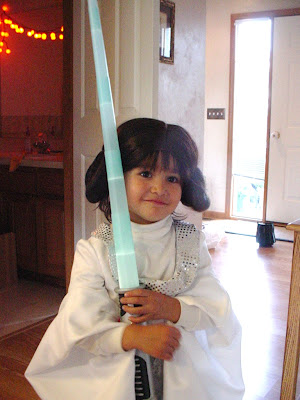 I still have very fond memories of the day I was watching Star Wars and my daughter was eating her lunch and checking out what daddy was watching.  So she asks me "who's that girl daddy?".  I reply "That's Princess Leia".  Well at that time she was into all that Disney Princess stuff, and so when she heard there was a princess in Star Wars, well she got up and plopped herself right down next to daddy and had to know all about this Princess who blasts Stormtroopers and tells the boys what to do.
One time later we were shopping and I wandered through the toy aisle.  Sydney pointed at this one Star Wars action figure, which happened to be Aayla Secura, the blue skinned Twi-lek Jedi.  The rest of the day, that's all I heard her talk about.  A few weeks later I'm coming home from work and I see her playing in the front window as I'm pulling into the driveway.  She's running around with a toy light saber and wearing her blue pajama bottoms on her head.  Another day I saw her watch the neighborhood boys running around outside with toy light sabers, one of which had a Darth Vader helmet on.  She went out and grabbed my blue light saber and chased them around the back yards.  Even the dog had to get into it. 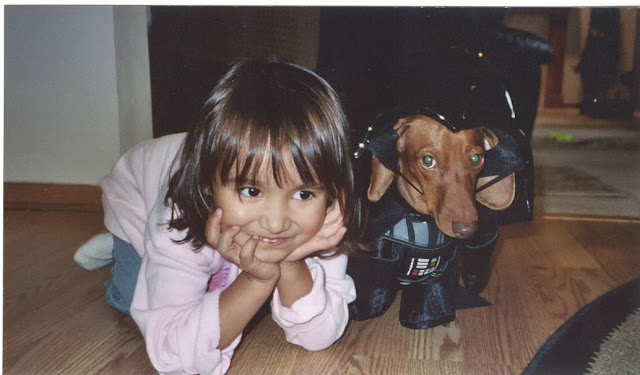 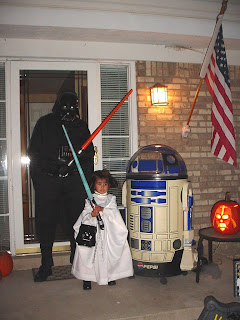 So when her birthday came up, which was just before Halloween, she wanted a Star Wars themed birthday party complete with costumes.  So I dug up a Princess Leia wig and toy light saber and my wife made the white gown.  I thought it would be cool to show up dressed as Darth Vader and present her a gift.  I had the new Hasbro Voice Changer Darth Vader Helmet and went and bought the Halloween costume, cape and gloves, yes I already had the toy light saber.  Her room, decorated at the time in Disney Princess stuff, had various Barbie Princess dolls lined up around the shelves.  So I found an OOP  Hasbro 12" Princess Leia doll to go with them.  While she was with the family opening presents, I snuck upstairs and donned my costume.  Walking through the crowd of relatives with my sound effects playing, my daughter looks up to see me and yells "Daddy!"  I reply in my best Darth Vader voice "NO SYDNEY KILEY!" which puts a surprised look on her face until I follow with "I am your father."  Of which then I pull the wrapped doll from out from under my cape.

So needless to say I had to get the Jen figure when I saw the green first appear on the Hasslefree website.  It brought back many fond memories.  However, I'm surprised that it has taken me this long to get these figures painted.  However it worked out as they were done just before Star Wars Day. 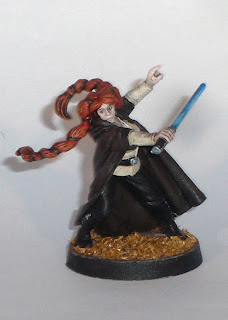 So to start off with Mystic Warrior Libbie, I painted her much like Obi-Wan Kenobi with a dark brown cloak and a yellowed ivory tunic below.  Like Obi-Wan I gave her a blue light saber.  For the sabers, I paint the blade white and then make a glaze using flourescent colors thinned down with acryllic floor wax.  Then I apply several coats of it to give it a fuzzy glow. 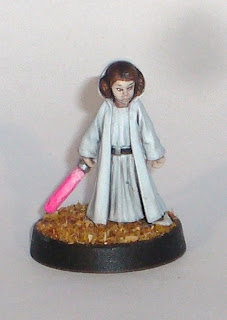 For Jen, I of course painted her like Princess Leia, inspired from my daughter's costume..  Using Reaper Ghost White as a base and highlighting with Pure White.  The figure is modeled with a Ninja-To rather than a true light saber.  Trimming the tip and rounding it off makes it look much more like a light saber.  Then using flourescent pink for the light saber, as it's my daughter's preferred color. 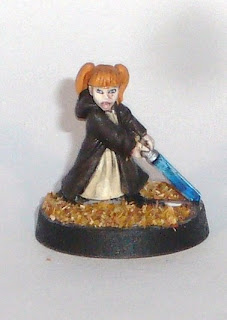 For Meg, I went with the Obi-Wan color scheme like Libby.  Like Jen, Meg's sword needed some trimming to make it look like a light saber. 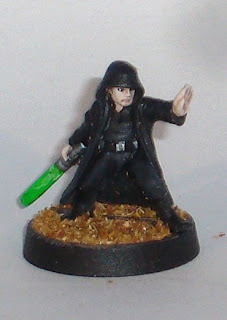 For Kieran, I painted him just like Luke Skywalker as seen in Return of the Jedi.  Painting the cloak black, then highlighting with Faded Black and then giving everything a heavy black inkwash.  The boots and belt were done with gloss black.  After trimming the sword, I used a thinned flourescent green over white to simulate the blade. 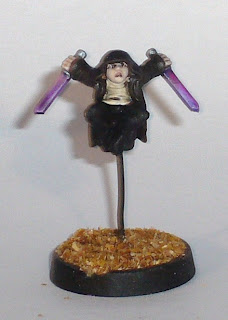 Luke, being in a very dynamic pose, I decieded to paint him in colors inspired from Mace Windu.  Using the same color scheme as Libby and Meg (standard Jedi colors I guess) but this time giving him purple blades like Mace.  Removing him from the sprue I drilled and mounted him on a thin steel rod to simulate him jumping up.

So after all these younglings were done, I finally got the idea.  How about Darth Vader surrounded by a pack of fully armed and operational Jedi younglings eager to get some payback.  So I dug up some of my Star Wars Miniatures Game miniatures (those are the pre-painted plastic stuff Wizards of the Coast used to put out) and got a Darth Vader and a bunch of Jedi Youngling figures.  So with Jen, Meg, and Kieran leading the pack and surrounding Vader, Youngling Luke (sitting on a stack of coins) goes in for the kill.  Only to have Darth Vader waking up from his dreams screaming NOOOOOOOOOOOOO!. 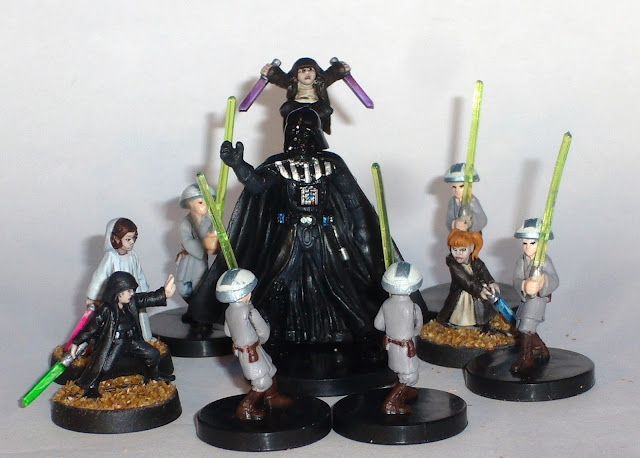